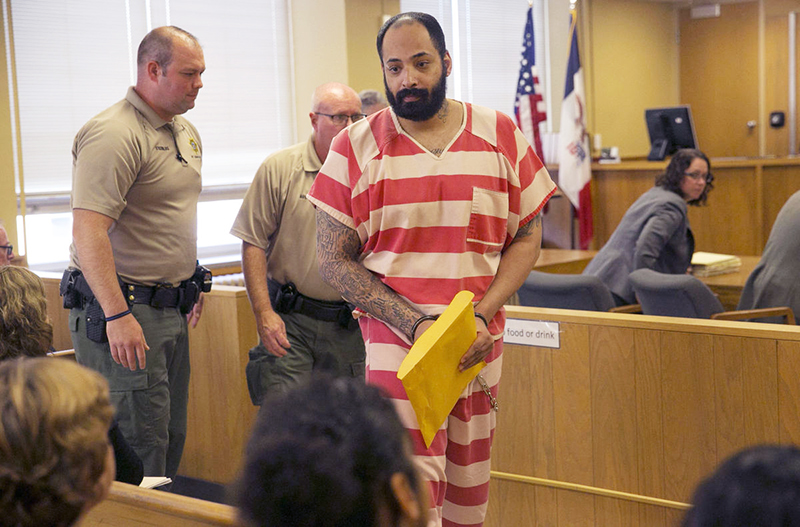 Peter Veal looks at his family as he is led out of the courtroom after being handed his sentence Tuesday at Cerro Gordo County Courthouse in Mason City. - Chris Zoeller/Mason City Globe Gazette

MASON CITY — A north Iowa man found guilty of two counts of first-degree murder and one count of attempted murder was sentenced to two consecutive life sentences plus 25 years Tuesday.

As he walked out of the courtroom in handcuffs, Peter Veal, 31, of Lake Mills looked at his family, who told him, “love you.”

The families of the victims were emotional during the sentencing at Cerro Gordo County Courthouse. Veal, who was dressed in a striped jail uniform, sat quietly as the victim impact statements were read by family representatives.

Mindy Kavars died of a gunshot wound to the throat shortly after 2 a.m. Nov. 17 at a residence in the 1600 block of North Hampshire Avenue in Mason City, police said. Caleb Christensen died of multiple stab wounds.

Hall claimed Veal has shown “no remorse” in the death of her sister.

“She was a great cook,” Hall wrote. “She fed her murderer Thanksgiving dinner…”

A few hours later, Kavars was dead, Hall said, killed by a man she just met.

“No matter how long you sit in a cell, it will never bring back my mom,” Rhine wrote. The prison sentence would bring some justice to the families and the victims, she said.

Christensen’s mother, Diane Bjornsen, wrote about how much her son loved hockey, fishing and country music.

“Peter Veal, what did my son Caleb ever do to you?” she asked.

Veal was also convicted of attempting to kill Ron Willis, who was also in the house that night. Willis testified Veal pointed a gun at his head and pulled the trigger, but the gun didn’t fire.

The mandatory sentence in Iowa for first-degree murder is life in prison without the possibility of parole.

Cerro Gordo County Attorney Carlyle Dalen argued for consecutive sentences as there were three separate crimes, though life in prison is covered either way.

Veal was also ordered to pay $150,000 each to the families of Kavars and Christiansen.