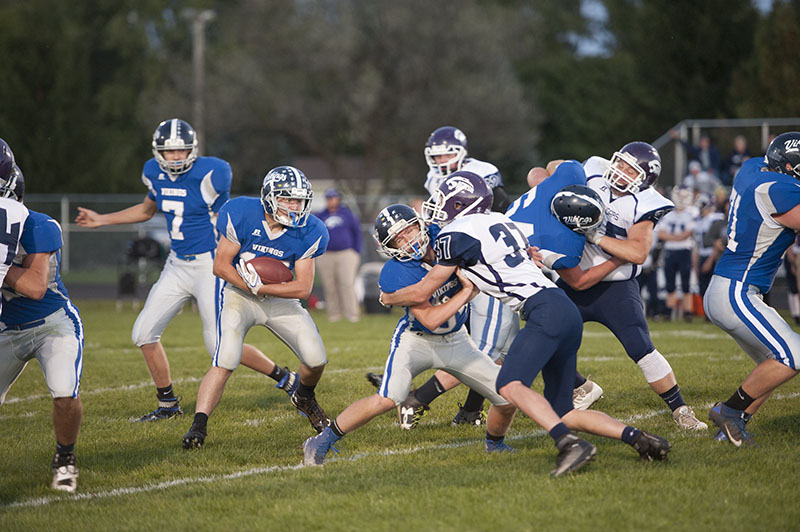 Northwood-Kensett senior Colton Moretz takes the ball early in the game against AGWSR. Moretz rushed for 131 yards and two touchdowns in the 60-22 victory over the Cougars. - Tyler Julson/Albert Lea Tribune

From the first whistle, the Vikings dominated in nearly every aspect of the game as they cruised to a Homecoming victory over the Cougars, ….

Northwood-Kensett got the scoring started early in the game. On their first drive, junior running back Samuel Kliment caught a short pass from quarterback Kole Parks and scampered into the end zone to take an 8-0 lead after a two-point conversion from senior Colton Moretz. 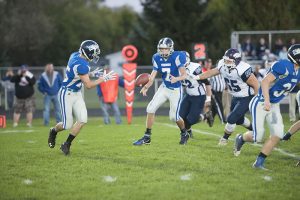 Northwood-Kensett senior Kole Parks tosses the ball to Moretz on the opening drive of the Homecoming game against AGWSR. Parks had 90 yards passing with one passing touchdown and one rushing touchdown. – Tyler Julson/Albert Lea Tribune

The Vikings would get another opportunity after a defensive fumble recovery by senior AJ Branstad. They would capitalize on the Cougar turnover almost instantly with a 33-yard rush from sophomore Caden Schrage.

Up 14-0, the Vikings committed one of their few mistakes when a fumble in their own end zone resulted in a touchdown for the Cougars.

On the ensuing possession, Northwood-Kensett looked to be stalling out, when Parks launched a deep pass to senior receiver Garrett Thompson for a 54-yard gain. The Vikings would score just a few plays later on a 15-yard run by Moretz. Schrage would provide a jolt of momentum right before the half when he rushed for a 1-yard touchdown and then intercepted a pass to send the game to the break. The Vikings lead at halftime, 30-6. 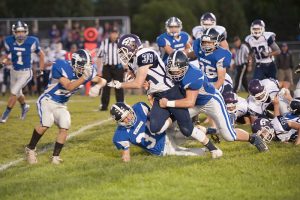 A host of Vikings defenders bring down the ball carrier on Friday night. As a team, the Vikings gave up just 85 yards of total offense to the Cougars and allowed just three first downs. – Tyler Julson/Albert Lea Tribune

AGWSR would start a comeback attempt right away in the second half when they returned the opening kickoff for a touchdown. Schrage would put an end to that thought when he returned the very next kickoff for a touchdown of his own. From that point on, the game was all Vikings. They would score two more times in the third quarter. One score came on a 1-yard rush from Moretz and the other came from and the other came on a breakaway 42-yard rush from Parks.

Heading into the final quarter, Northwood-Kensett had a comfortable 52-14 lead.

The Vikings would tack on more points in the fourth quarter with a run from sophomore Blake Hagen and would go up 60-14.

The Northwood-Kensett defense would give up one more with around four minutes to go, but at that point it didn’t matter. The Viking cruised the rest of the game to grab a homecoming victory.

The Vikings climbs to 2-4 on the season and they will look to continue riding their wave of momentum when they take on Turkey Valley at home on Friday.