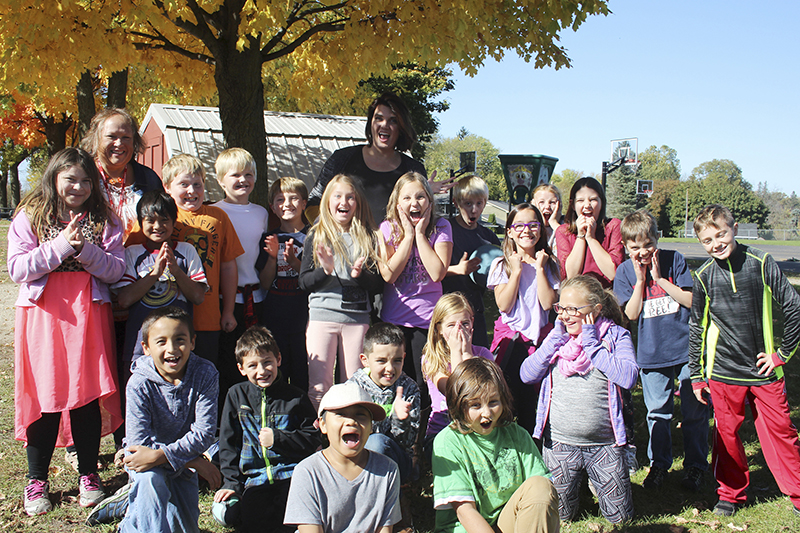 Melinda Talamantes’ fourth-graders can agree on one thing: the day they discovered their Lakeview Elementary School class won a contest to see an advanced screening of the movie “Wonder,” there was a lot of screaming going on.

“I was really excited, and I was jumping and stuff,” Lakeview fourth-grader Greta Moller said.

The national contest run by Lionsgate asked classes to submit precepts to live by. Children brainstormed and created sayings about kindness and acceptance. According to Talamantes, 400 classrooms across the nation were selected as winners.

The class will go to Owatonna Oct. 26 to watch “Wonder.” The Lakeview PTA is paying for busing and concessions for the children. As part of the prize, the children will also participate in a Skype Q&A with Jacob Tremblay (Auggie), Izabela Vidovic (Via) and Daveed Diggs (Mr. Browne).

The class read “Wonder” as their first book of the year, which Talamantes said she does to set the classroom community. Talamantes found out about the contest on Facebook.

“I just wanted the book to be more interactive and meaningful,” she said.

“Wonder” follows August “Auggie” Pullman, who starts at a new school. Born with a facial difference, Auggie tries to teach the other children about what it means to look for beauty on the inside.

Talamantes has been teaching “Wonder” with her fourth-grade classes since the book came out.

“It’s my favorite book,” she said. “It just has so many lessons about choosing kindness.”

“I liked it, how you don’t define people by their face, how they look,” he said. “You just don’t judge people.”

Moller said she is excited about becoming a Certified Kind Classroom, an educational initiative in its third year.

Talamantes announced to the class that they won on Monday. She said she had known for two weeks before then, but had to nail down the details before she told the class.

“I was surprised and I really wasn’t, because we have a lot of kind people in our class,” Musick said.

Musick’s precept was based on self-perception of beauty: “Makeup isn’t who you are. You are who you make yourself.”

The contest is one part of the activities Talamantes has planned around the book. On Monday, the class participated in a virtual book club with a classroom in Canada in which each class made Google slides of questions for the other classroom. In addition to learning about kindness, Talamantes said, how the classroom has interacted with “Wonder” has allowed them to explore technology like Google hangouts, Skype, uploading and sharing files.

But according to Talamantes, the takeaways go beyond the classroom.

“We see a lot of bullying behavior,” Talamantes said of the current cultural climate. The number one precept she hopes her students carry forward is the book’s biggest precept.

“When given a choice, choose kindness,” she said. “I think right now, that’s important.”