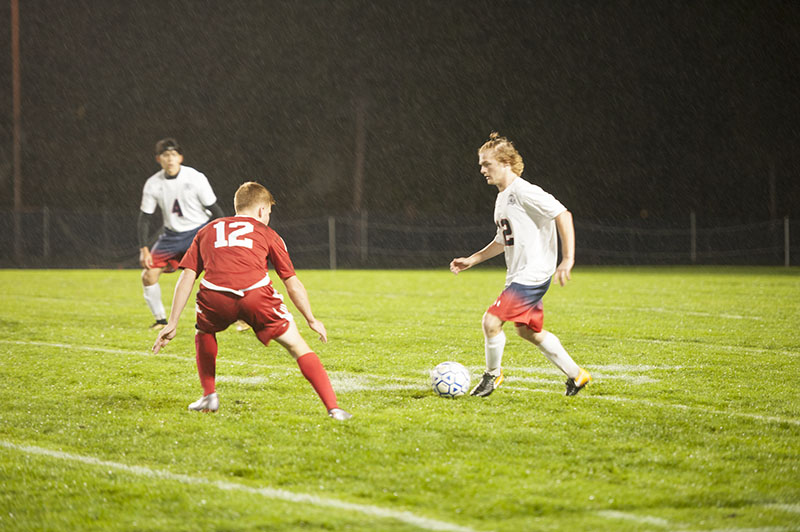 Despite leading the match at halftime, the Tigers would give up two goals in the second half  dropping the match to the Packers, 2-1. 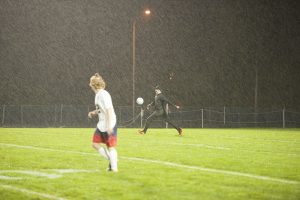 Albert Lea senior Levi Kermes kicks the ball away after one of his many saves Thursday night against Austin. The Tigers start postseason play on Monday at home. – Tyler Julson/Albert Lea Tribune

It was a cold and rainy night for a soccer match, but that didn’t stop the Tigers from starting with high degree of excitement and momentum. After a 45-minute rain delay, the match finally got started.

The Tigers would take the lead midway through the first half after a goal by senior Lennon Shimon.

Albert Lea would take a 1-0 lead to halftime and the excitement throughout Tiger Stadium was palpable.

The Tigers came back out after the break doing much of the same things they did in the first half. The Tigers played nearly flawless defense and were incredibly smart with the ball on offense. Senior Levi Kermes had an especially great game at the net for the Tigers, blocking more than a handful of shots from the Austin offense.

Trouble came when Austin got their first goal of the match  coming off a penalty kick with  less than 20 minutes remaining.

It looked like the match would be headed for extra time late in regulation. However, with 30 seconds until the final buzzer, Austin snuck in the game winning goal, stunning the Albert Lea players and crowd.

After the game, head coach Zach Luther said simply, “I’m incredibly proud of the work my team put in tonight.”

Albert Lea finishes the regular season  8-6 and will host a match for the first round of sections. The match will take place on Monday against an opponent still to be determined.