Dayton casts a long shadow in race to replace him 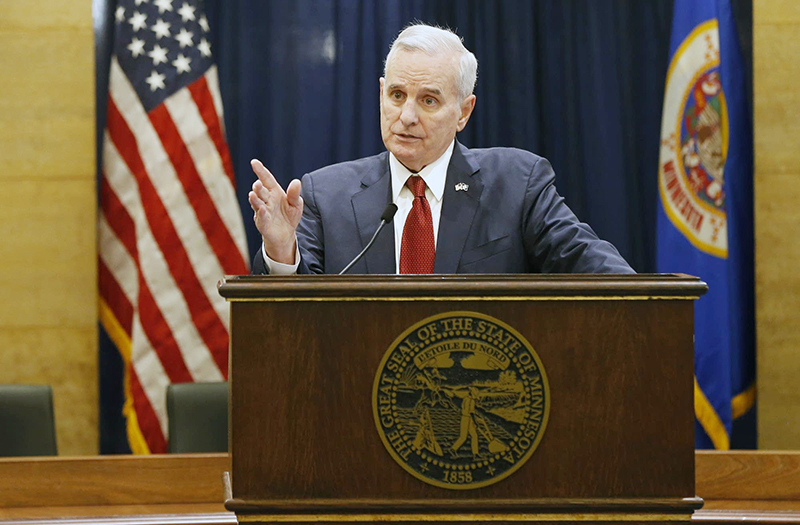 Republicans hoping to boost their chances of winning the Minnesota governor’s race are warning that a DFL win in 2018 would amount to another four years of Gov. Mark Dayton. Democrats said they’d be different. - Jim Mone/AP file via MPR News

The six Democrats running for governor next year are hoping Minnesota voters do something they’ve never done before: elect a DFL candidate to succeed a retiring DFL governor.

Given that history, it’s not surprising that the announced 2018 candidates are spending little time on the campaign trail talking about Gov. Mark Dayton.

Republicans are trying to boost their chances by warning that a DFL win in 2018 would be tantamount to another four years of Dayton. Most of the DFL candidates take exception to such comparisons.

Asked about similarities with the outgoing governor, State Auditor Rebecca Otto would say only that she belongs to the same political party. She stressed that she has a different style.

Otto has a campaign ad that declares “Time for a Change.” It also points outs that she won more counties than Dayton in 2014.

State Rep. Tina Liebling, DFL-Rochester, also sees differences. For example, she would not have made a bid for Amazon’s massive second headquarters project.

“I’m certainly not running to be a clone of Gov. Dayton, although I think he’s done a lot of good things,” Liebling said. “My campaign is not one of, let’s just continue on the road we’re on, because I think we need to make some change.”

Not all the candidates are keeping their distance.

“I don’t think it would be bad to have another four years of Mark Dayton,” said Rep. Paul Thissen, DFL-Minneapolis, who said he thinks Dayton has done a good job for the state.

As a hopeful Dayton successor, Thissen said he would face a new set of challenges. But he said he wants to lead in the same spirit.

“Mark Dayton has been authentic and he’s been true to his word and I think he’s been a very good governor,” he said.

Dayton is staying on the sidelines. He recently told reporters that it’s too early in a long campaign to get involved.

Rep. Erin Murphy said she’s campaigning on her own ideas and values and that she is not Dayton, although she pledged a Dayton-like devotion to the job.

“There are always going to be detractors, but people like him,” said Murphy, DFL-St. Paul. “They trust him, and they believe he has worked hard for the state of Minnesota.”

St. Paul Mayor Chris Coleman said he believes most Minnesotans like the job Dayton has done as governor and the direction he has taken the state. That’s why he thinks the DFL can hold on to the office. But Coleman said he has his own record to run on.

“I’m not running against the Dayton administration, because I admire what the governor has done,” he said. “But I’m running because I have a vision for the state of Minnesota.”

U.S. Rep. Tim Walz said he shares core values with Dayton and is glad he has been governor. He too points to style differences. As for the trouble past DFLers have had succeeding one of their own, Walz said he thinks he can change the pattern.

“I coached a football team that lost 36 games in a row before we won a state championship two years later, Walz said. “So, I’m used to some of those historical preferences of people telling you just can’t do it because this is what happened. I kind of see that as a challenge, too.”