Dick Herfindahl: What a great way to finish the season 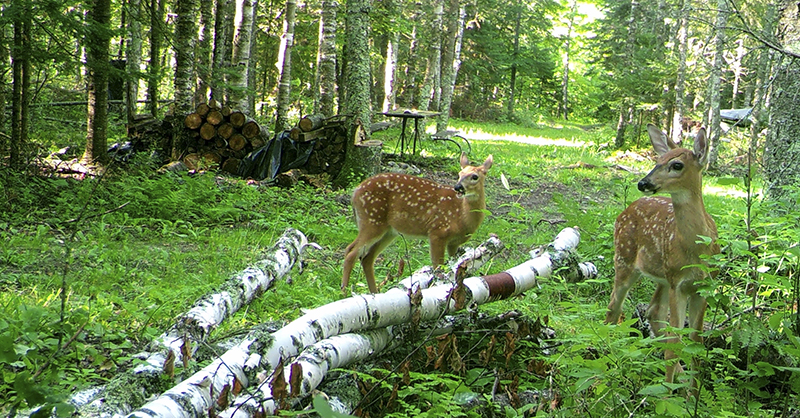 These two fawns and their mother were caught on game camera visiting the area around the cabin almost daily. - Provided

This past week my son Brad and I headed north to the cabin for a few days. Brad’s son Dylan and his friend Liam drove up from St. Cloud after they finished their classes. I was looking forward to seeing Dylan and doing a little fishing with him.

The weather cooperated, for the most part, and the fall colors were great. Cool weather, beautiful scenery and no bugs! If you couple that with catching a few fish it was a great five days. Dylan and Liam even got to do a little duck hunting while there.

I hadn’t been to the cabin since the end of June and none of the family had been there for a while either. I was anxious to check my game cameras to see what type of critters we had visiting when we weren’t there. We had a bear visit earlier in June and he appeared on the camera a couple of different times in July and August. There were also numerous raccoons, a fox, a skunk and a doe and her two fawns that were there almost every day or night.

Our lake had a freeze out a couple of years ago so it hadn’t been fished much since then. My grandson Taylor and a couple of his friends were up there early in June of this year and tried fishing it. They caught a few small largemouth bass; I took that as a very good sign. I do not know where the fish came from but every time the lake has frozen out fish appear within a year or two.

We haven’t had perch in the lake for at least five years, but this year we caught some perch along with the bass, some sunnies and a few small crappie. I am crossing my fingers that the lake does not freeze out again this year because it could be even better next year. 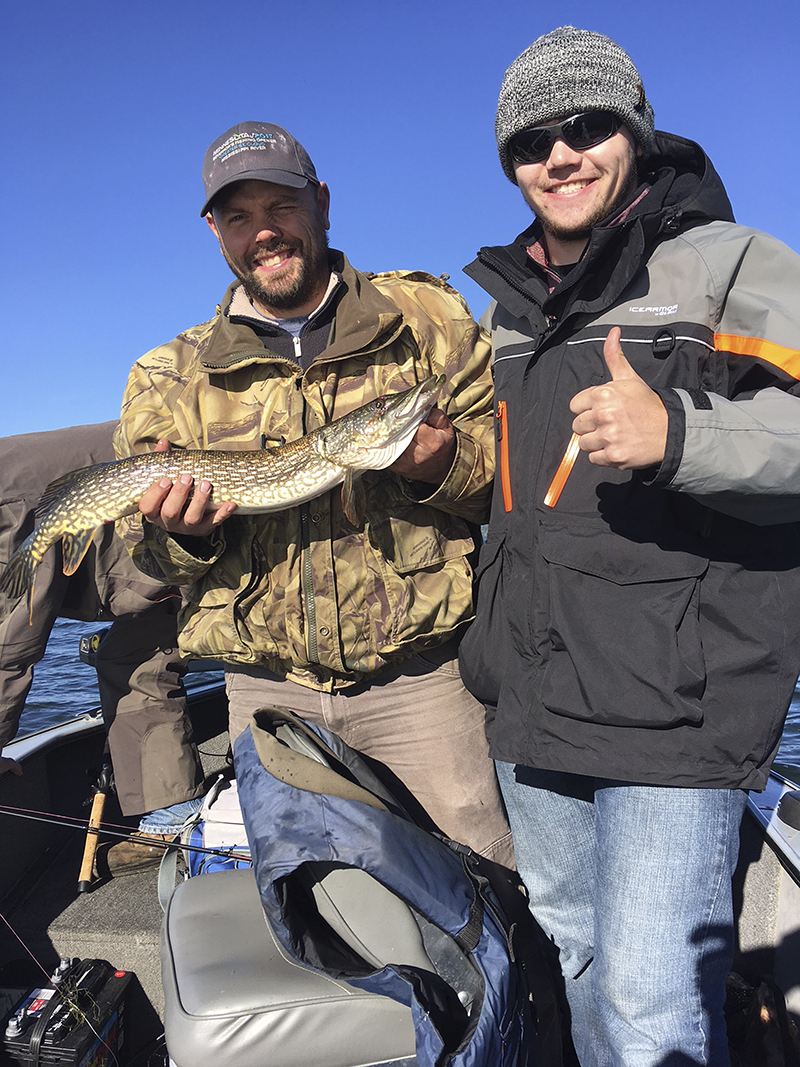 Brad Herfindahl and his son, Dylan, are shown here as Dylan gives a thumbs up after netting a 30-inch northern for his dad. After taking a quick picture, the fish was immediately returned to the water. – Provided

Brad and I hit the lake on Friday and caught quite a few bass in the 1-1/2 lb. range, we also caught a couple larger ones along with some smaller ones. This is the first time that we have had predatory fish of any kind in the lake, which is what it has needed for years.  I am amiss to know where these adult fish keep coming from, but I’ll take it. The water is very high this year so that might be the answer, they must be coming in from an adjoining lake.

On Sunday we waited out a downpour and steady rain before heading to Spider Lake for a day of fishing. We spent a lot of time on the lake that day but the fish were not exactly jumping into the boat. Brad and Liam caught some pike, but Dylan and I only caught the skunk. It is very seldom that I get shut out on that lake, but it does happen on occasion. Brad caught a 30-inch pike and a smaller one that we could keep. On Spider, all northern between 24-36 inches have to be returned to the lake. We kept two fish between 22-23 inches for table fare. Dylan’s friend Liam lost a huge fish when it hit his bucktail, broke his line and then rolled on top of the water with the lure still hanging out of its jaw.

We packed a lunch for our day on Spider and like we have done many times in the past, we pulled up to one of the national forest campsites and had shore lunch. Our lunch is usually sandwiches, chips and sodas. It was a perfect day for a lunch break and I wasn’t aware that Brad had never been to this spot before, so he explored the trail that led to the pond that lay just over the ridge.

On Monday, Brad went out on Boggy to get a few fish to take home for the family. Emma, my oldest granddaughter loves fish so he kept enough for a nice meal for them.  That afternoon the weather turned cold and windy, but Dylan and Liam took my boat and went to a different lake. Brad and I decided that those two northern would probably not be enough for four hungry guys so he went back out and caught another bass.

There is nothing better than fish fresh out of the water and into the pan. I fried up the fish and we added a few grilled hot dogs for good measure. I have to say that the bass was excellent, nice and flaky with good flavor. This topped a great few days spent making memories with family and a friend.

Until next time: Take some time to enjoy the fall colors, hunt a little waterfowl and maybe even do some late fall fishing.

Please take some time to honor those who have sacrificed so much for the freedoms we enjoy today. Also, take a little extra time to remember those who made the ultimate sacrifice, those who served and those troops serving today.