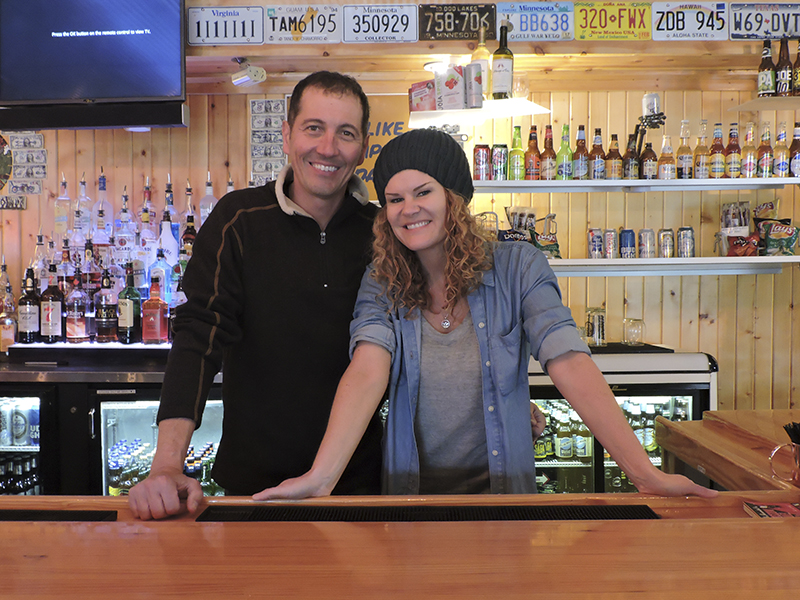 Jeff and Gina (Crumb) Monacy are the new owners of Bend in the Road in Manchester. - Kelly Wassenberg/Albert Lea Tribune

MANCHESTER — After having the doors padlocked shut for nearly four years, The Bend in the Road has reopened in Manchester under the ownership of a former customer.

“I’ve always wanted to own The Bend in the Road,” Gina (Crumb) Monacy said. “It was always in the back of my mind. I didn’t want to own a bar, I wanted to own this bar.”

The area native was living in Colorado when she thought of returning home to be closer to her family. Knowing the bar she used to frequent was scheduled to be auctioned off, Monacy and her husband, Jeff, decided to join in via telephone.

“Without business ownership we probably never would have migrated back to the area,” Jeff Monacy said.

Both of the Monacys have spent over a decade working in management positions in cities such as Portland, Chicago and Kansas City. He worked with big box retail companies, while she worked managing salons and spas.

While they had experience with the service industry, the venture of restaurant/bar ownership was new to them both.

“At the end of the day, business is business,” Jeff Monacy said. “There are different challenges and it’s a different scope, but a lot of the same skills apply.”

The transition in ownership occurred last fall; however, the bar didn’t officially open until this past June. There was remodeling that needed to be done before the reopening. 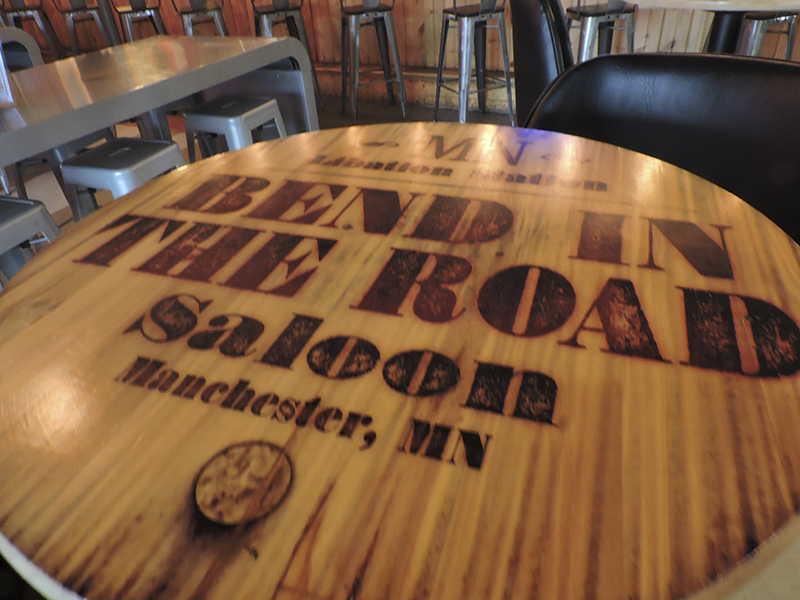 Bend in the Road has been remodeled since it closed over four years ago. The new owners, Jeff and Gina Monacy, brought in new decor for the establishment, including tables branded with the bar’s name. – Kelly Wassenberg/Albert Lea Tribune

Renovations to the outside were done for aesthetic reasons, yet the inside of the bar needed updates to meet current code regulations with the state. Some of these were the result of the couple deciding to serve food at the bar, but others were specifically due to changes in regulations since the bar had last served customers.

The Monacys also wanted the interior to have a respectable, yet edgy feel to it.

“The vision was to be comfortable to all types of people, all demographics,” Jeff Monacy said. “There are no niches. We have our regulars, but we still have weekends when 70 percent of the people in here are here for the first time.”

He said during events the bar will host patrons ranging in ages from 21 to 80, they’re all having a good time and that was their goal.

They also want to bring drinks to the area that bar patrons won’t find anywhere else. Jeff Monacy notes their Moscow Mule recipe cannot be found anywhere else and has become their signature drink. They also carry signature liquors and craft beers that are hard to find in the area.

The addition of food to the bar has given them a way to allow Gina Monacy to showcase her talent for making pizza and flatbreads. All of the ingredients are fresh and never frozen, which will allow them to play with seasonal offerings, such as a Reuben or Philly flatbread. The bar also offers burgers, hot sandwiches and oven-roasted wings.

The couple still has more in store for the bar, though.

The newly installed patio will be a space to host live entertainment. Pool and dart tournaments have already started, and there is potential for volleyball and bean bag tournaments as well.

Special events already marked on The Bend’s calendar include a Halloween bash featuring classic rock/acoustic act Brett Feist and a Halloween costume contest on Oct. 28. The first annual Harvest Fest will be Nov. 18 and will feature the band Switchroad.