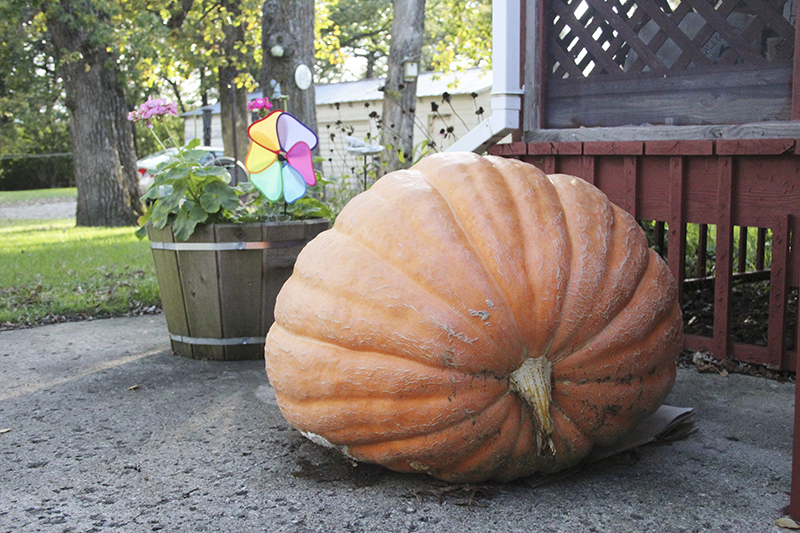 Helen Knapp’s pumpkin weighs between 150 to 250 pounds, depending on who you ask. This is the second year Knapp has grown large pumpkins with her neighbors. - Sarah Kocher/Albert Lea Tribune

Estimates vary on how heavy it is, but those who’ve seen it agree: Albert Lean Helen Knapp’s pumpkin is big.

Her neighbor, Lowell Millhouse, has the most conservative estimate. (The group doesn’t have a scale to weigh it.) He guessed the pumpkin was approximately 150 pounds. Knapp believes her pumpkin is 200 pounds. Clancy Swanson, a Faribault resident who comes down to help Knapp clean up her property, guesses 250.

There were two large pumpkins this year, and the bigger one sits next to Knapp’s front stoop. The other belongs to the Millhouses, who grow the pumpkins with Knapp. To get the pumpkins to these destinations, the trio used Millhouse’s forklift.

“(Swanson) lifted one — now this guy is really strong,” Knapp said. “He’s not very big, but he’s really, really strong — he lifted one end of it so they could get the front-end loader underneath it, and Clancy said, you know, ‘That’s got to be at least 200 pounds’ … It’s the biggest one I’ve ever seen.”

Knapp and Millhouse have a few guesses as to why the pumpkins have turned out the size they have. One theory? Fertilization.

“It was an old cow yard or barnyard up there where it’s growing,” Knapp said. Millhouse said the manure from the area might contribute to the pumpkins’ growth. 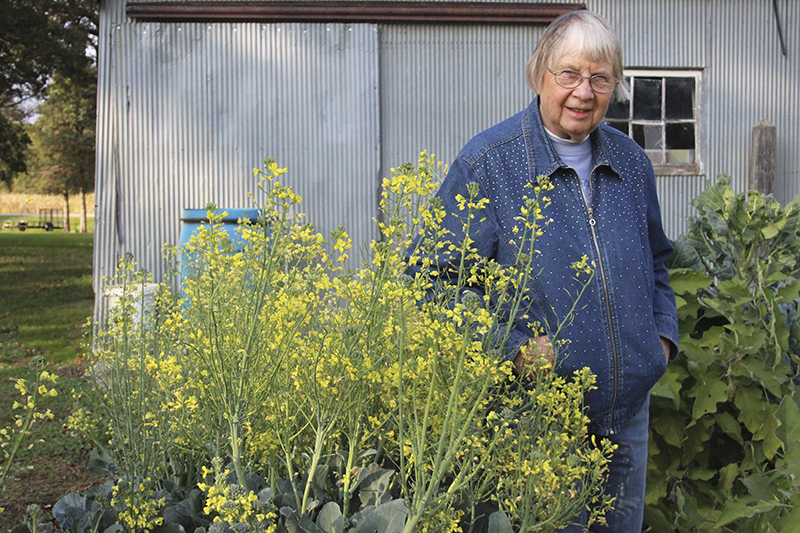 Helen Knapp stands in one of her four gardens, near the spot she grew her unusually large pumpkins. – Sarah Kocher/Albert Lea Tribune

Additionally, Knapp said she thinks she may have planted seeds for a large pumpkin, but she’s not sure.

“I don’t know which seeds I planted,” she said.

Twenty-five years ago, Knapp bought seeds for giant pumpkins and other big vegetables when she was living in North Carolina. She never planted them down there, but she brought them with her when she moved.

“If you keep your seeds in a refrigerator or a freezer, they’ll last forever,” Knapp said.

She guesses that’s what’s growing now — those 25-year-old seeds. But again, she’s not sure.

“I should probably keep better notes on what I grow, but this is all just fun for me,” Knapp said. “When you get to be 80, you know, who cares?”

This is the second year Knapp and the Millhouses have grown large pumpkins together on her property. Last year, their harvest was of four ranging in large size. Millhouse said he wasn’t expecting the pumpkins to be as large as they were.

For now, the pumpkins are on display.

“It’s going to sit out in front until Halloween is over, and then it’s going down into the junk pile,” Millhouse said.

When it’s time, Knapp said she will harvest the seeds to try out two recipes she heard on the radio. That, or feed the birds.

“It’s an unusual sight to see, something that large,” Swanson said. “Something I don’t see every day.”

As for next year’s large pumpkins?

“You know, I don’t know,” Knapp said. “I’ll have to see which seeds I have left in the basement.” 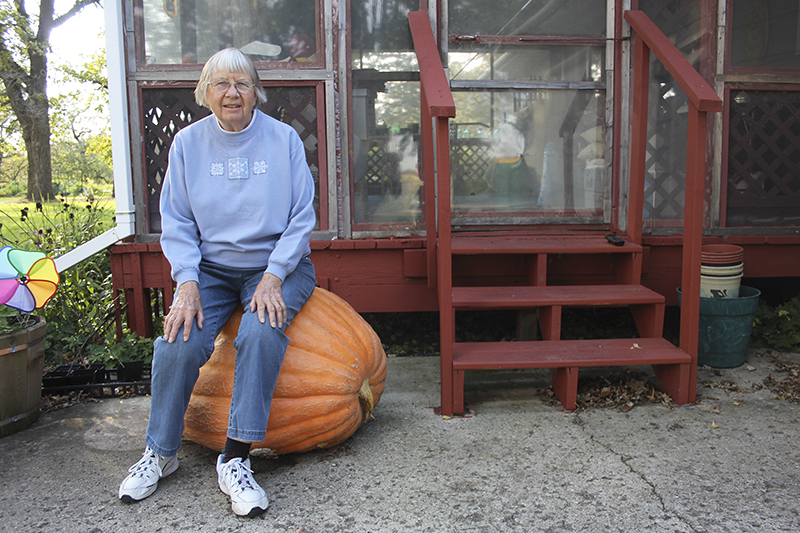 Helen Knapp’s large pumpkin may have come from seeds she kept in her refrigerator for 25 years. – Sarah Kocher/Albert Lea Tribune