Funeral services for Keith F. Benesch will be at 10 a.m. Saturday at United Methodist Church in Albert Lea. The Rev. Don Malinsky will officiate. Visitation will be from 5 to 7 p.m. Friday at Bonnerup Funeral Service, as well as one hour prior to the service at the church.

Interment will take place at Graceland Cemetery, where military honors will be accorded by Albert Lea area veterans organizations. 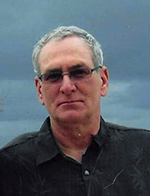 Keith Frank Benesch was born Sept. 10, 1952, to Gordon and Phyllis (Smith) Benesch in Albert Lea. He graduated from Albert Lea High School in 1971. On May 6, 1972, Keith was united in marriage to the love of his life, Darlene (Carlson), at United Methodist Church in Albert Lea. To this union, the couple was blessed with two children, Jennifer and Tim.

Keith enlisted in the U.S. Navy and served his country honorably from 1972 to 1976. After Keith returned from the military, he worked for a few years and then completed two years of vocational school at Riverland Community College. Keith then worked for Birds Eye as a boiler operator for over 22 years.

Keith was a lifetime member of United Methodist Church. He was baptized, confirmed and married at United Methodist. In his free time Keith enjoyed many things. He liked bicycle riding, motorcycle trips and always looked forward to fishing and camping with his family. Keith collected and repaired pocket watches, and had a vast music collection — ’60s and ’70s music being his favorite. Keith liked to tinker with things and he could fix anything that was put in front of him. Above all, Keith was grateful for his wife, children and grandchildren and cherished the moments he spent with them. He can be described as a caring, loving, transparent person who would do anything for anyone, without expecting anything in return. His grandchildren brought out the best in him, and he enjoyed every moment spent playing with them.

Keith will be sadly missed by his wife of 45 years, Darlene, of Albert Lea; children Jennifer (Eric) Norgaard of Cottage Grove and Tim (Laura) Benesch of North Mankato; grandchildren Amber, 11, Katelyn, 8, Zachary, 7, and Jonathan, 5, with another grandchild on the way; siblings Kenneth (Linda) Benesch, Janeen Benesch-Storlie and Jolene (John) Berg; sister-in-law, Sue (Brian) Larson; as well as many other loving relatives and friends.

He is preceded in death by his father, Gordon Benesch; brother, Kevin Benesch; and mother- and father-in-law, Leo (Audrey) Jensen.