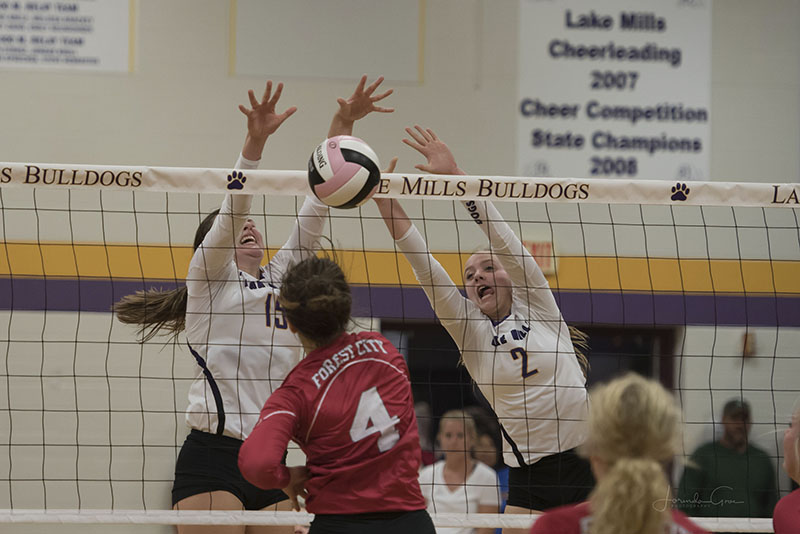 Lake Mills sophomore Megan Groe and senior Mallory Wilhelm go for the block Tuesday night. The Bulldogs would go on to secure their conference champsionship, 3-1 over the Indians. - Lory Groe/For the Albert Lea Tribune 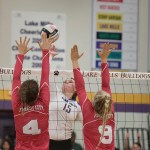 Lake Mills senior Mallory Wilhelm gets a kill during the confernce-clinching win for the Bulldogs. Wilhelm had 13 kills and eight blocks. – Lory Groe/For the Albert Lea Tribune 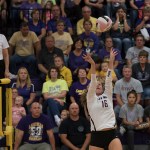 Senior Ashley Groe deals out an assist Tuesday night against the Indians. Groe had 44 assists on the night and tacked on 13 digs. – Lory Groe/For the Albert Lea Tribune 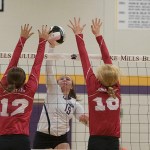 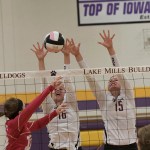 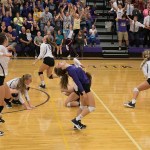 The Bulldogs celebrate as they win the Top of Iowa Conference championship with their 3-1 win over the Forest City Indians. – Lory Groe/For the Albert Lea Tribune 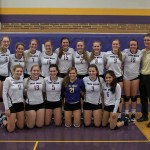 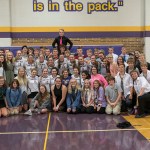 The Bulldogs pose with the student section that came out to show their support Tuesday night against the Indians. – Lory Groe/For the Albert Lea Tribune

Lake Mills is once again the Top of Iowa Conference champions after their win over Forest City Tuesday night.

The Bulldogs only dropped one set as they cruised to beat the Indians, 3-1.

Lake Mills was given a bit of a scare to start the night. After a slow start in the first set, they would be unable to comeback, losing the set 25-17.

The Bulldogs were able to pull themselves together starting in the second set. They would go back and forth with the Indians for a bit, but would end up pulling away to win it, 25-15.

Tied at two sets each, the Bulldogs would again pull out a narrow victory in the third set.  After a late timeout, Lake Mills pulled away to grab a 25-20 victory and take a two sets to one lead.

The final set would be all Bulldog. They would go on  to win the set by 11 points, 25-14, and secure their conference championship.

“I really thought the girls played well tonight, after a slow start,” he said. “We responded after that first set.  The girls adjusted and stayed together as one unit.  The seniors showed great leadership and the underclassman stepped up their play.  That’s a great combination of things.

“I am proud of the girls for keeping the tradition alive.  They wanted this match tonight, but they had to work for it.”

Lake Mills improves their record to 30-1 overall and 8-0 in the Top of Iowa Conference and will play again on Tuesday when they host Hampton-Dumont, Nashua-Plainfield and North Butler at their home quad meet.