Marjorie “Marge” Charlotte Peterson passed away Wednesday, Oct. 25, 2017, at St. John’s Lutheran Community in Albert Lea. Funeral services for Marge will be at 10 a.m. Nov. 4 at First Lutheran Church in Albert Lea. The Rev. John Holt will officiate. Visitation will be from 5 to 6:30 p.m. Friday at Bonnerup Funeral Service, 2210 E. Main St. in Albert Lea. Interment will be in Hillcrest Cemetery.

Marjorie was born Aug. 18, 1925, the daughter of Martin Edgar (M.E.) and Ruth Hanson Youngquist in St. Paul. Her musical talents were quickly recognized, especially her skills at the piano, and at the young age of 8 she performed her first solo piano recital. A few years later she was chosen to play with the renowned composer and pianist Percy Grainger. 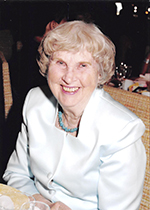 Marjorie graduated third in her class from Johnson High School at the age of 16 and went to work for First Trust Co. She met the young, handsome law student Ralph Peterson at First Lutheran Church Luther League in St. Paul and married him in 1948. She then joined Ralph in Albert Lea, where he began his legal career.

Together they raised their four daughters, Charlotte, Patricia (Patti), Carol and Anita, with most of their married life in their beloved house on Lakeview Boulevard.

Music was Marjorie’s lifelong passion. After mastering the piano, she pursued and mastered the pipe organ and harpsichord, taking lessons from Maurice Anderson at First Lutheran Church. She became assistant organist in the early 1970s and was the sole constant in the church’s music ministry, supporting at least nine ministers of music and becoming an interim minister of music in between their tenures. She continued that role well into her 80s. Marjorie and Ralph were mainstays of First Lutheran Church, where she was also involved with her circle, music commission and associated activities.

As an accomplished pianist she also accompanied several Albert Lea Community Theater productions, including “Annie Get Your Gun” and “South Pacific.”

Marjorie and Ralph traveled extensively and visited five continents, often returning to favorite countries and cities. Of note was their annual trip to New York City, which they were able to enjoy for almost 50 years, as Marjorie became an expert navigator and unofficial tour guide of the city and delighted in exploring museums and restaurants. Over the years, they attended well over 250 Broadway plays and saved every playbill. Another special spot for Marjorie was Minnesota’s North Shore, where she traveled with Ralph, their children and grandchildren. She thoroughly enjoyed picnics on the North Shore and picnics anywhere, for that matter.

A voracious reader, Marjorie read all manner of fiction, non-fiction and was well versed in current events, keeping up on the state of the world and providing perspective on those events almost until the end.

Marjorie was an excellent seamstress and knitter, making clothes for her four daughters and often knitting sweaters to match. There were few Christmases when her girls were young without new homemade matching dresses.

She was preceded in death by her husband, Ralph, in 2013.

The family sends special thanks to the St. John’s community for their loving and compassionate care of Marjorie during her close to four-year stay.