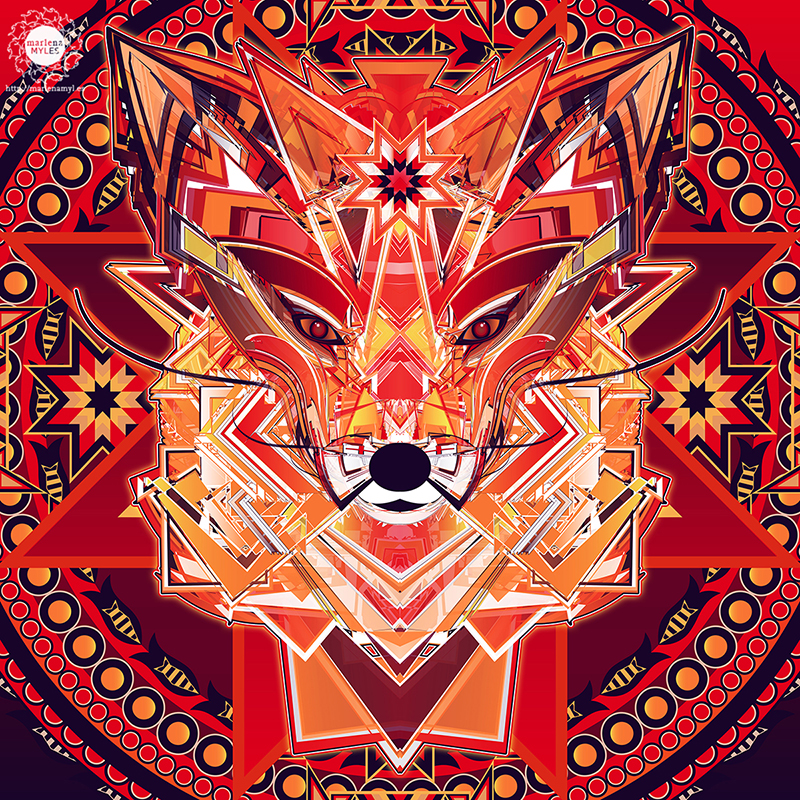 Marlena Myles' fox is one such digital piece on display as part of the "Indigenous" exhibition. - Provided

But what are they not?

“The common misconception with Native art is that it’s traditional — it’s stuck in the past,” Myles said. “But the truth is that Native people have always been innovative. … So, to use Illustrator is just a continuation of what my ancestors already did.”

Myles said her designs pay homage to Lakota and Dakota women, who did more geometric, abstract art while the men tended toward figurative designs of war battles. Several of her pieces are part of the Freeborn County Arts Initiative’s current exhibit, “Indigenous,” which opened Sept. 14. Myles’ geometric animal designs show alongside photography by Hilary Abe and ledger drawings by Holly Young, both regional Native artists.

Marin said the Freeborn County Arts Initiative has been looking forward to this exhibition since the organization was founded.

“This indigenous artwork is a huge part of our cultural heritage as a region, as a state, as people, and, you know, we were very intent on bringing indigenous art to the gallery,” Marin said.

For curator Susanne Crane, the show falls in line with the Freeborn County Arts Initiative’s emphasis on fresh, new ideas. According to Crane, Albert Lea has never had an indigenous show before.

“It’s a very educational show,” Crane said. “It’s a very important show. I think the significance of it can’t be underplayed.”

Myles said the different artistic styles of the three artists combined to create “Indigenous” have the potential to encourage Albert Lea residents to think in a different way.

“It’s just kind of cool to see three different views from Native artists,” she said. “I just think people should come and change their perspectives on what Native art is.”

Young’s ledger drawings, too, flip the narrative. Ledger drawings were historically made when Native American schools were not provided paper, and therefore students recycled old ledgers that were headed for incinerators, Crane said. 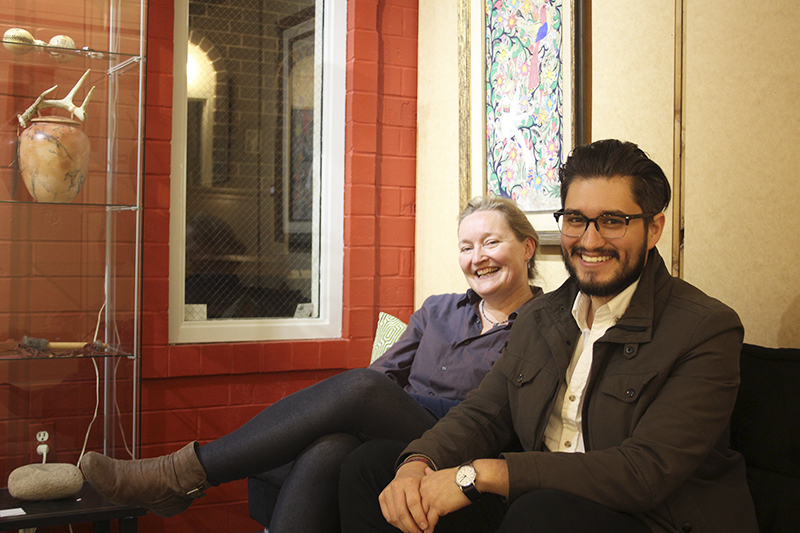 Susanne Crane, left, and Elisha Andrew Marin said they have been looking forward to an exhibition of indigenous artwork since the the Freeborn County Arts Initiative was formed. – Provided

“You’ve got this throwaway paper, and then you’ve got these brilliant artistic ideas,” she said. The pieces are “exuberant and hopeful,” and play with background and foreground.

The exhibition was created in partnership with Two Rivers Gallery in Minneapolis, which provided art for the collection. The show also includes indigenous artifacts, like the 2,000- year-old fire-starting stone sitting weightily on the bottom shelf of a clear glass case.

“It’s a really cool — a really interesting — marriage of both ancient and current indigenous traditions,” Marin said. “… It’s really quite amazing to have, in the same space, historic indigenous artifacts shown next to digital pieces … which are a modern take on an indigenous historical form of art.”

The dialogue between history and art is purposeful, as is the scheduling of the show at the same time as the Big Island Rendezvous. Marin said the Rendezvous and the Indigenous exhibit comment in different ways on a similar theme.

“They’re both celebrations of a shared cultural identity,” Marin said.

The artist reception will be at the Freeborn County Arts Initiative from 7 to 9 p.m. Oct. 27.

All three featured artists are expected to be in attendance.