The contract for new Albert Lea wrestling coach Andy Hackenmueller was rescinded after he was arrested for public intoxication earlier this month at Diamond Jo Casino.

“As the result of a recent investigation, Albert Lea Area (Schools) has withdrawn its offer to Andy Hackenmueller to be Albert Lea High School’s head wrestling coach,” said Superintendent Mike Funk Wednesday afternoon in an email. “Mr. Hackenmueller will not be associated with the program in any manner.”

The district has offered the position to math teacher and baseball coach Paul Durbahn. 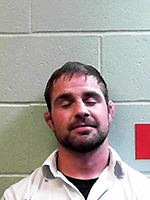 “We expect that coach Durbahn will uphold the high standards we have come to expect in our historically successful ALHS wrestling program,” Funk said.

Worth County District Court records state Hackenmueller was arrested after a Worth County deputy was dispatched Oct. 8 to Diamond Jo Casino for three intoxicated people who were kicked out from the casino and were going to drive.

Surveillance video reportedly showed Hackenmueller drinking out of a can in the parking lot, setting it near the tire of a vehicle he exited. He was described as having “bloodshot, watery eyes, slurred speech and an odor of an alcoholic beverage.”

The deputy reportedly saw a beer can that was still cold near the tire of the vehicle, and Hackenmueller was arrested for public consumption and taken to the Worth County jail and reportedly had a .152 blood-alcohol content.

In an email Thursday morning, Hackenmueller said he did not think he would lose his job for the incident.

“I didn’t feel I was deserving of the $65 public consumption ticket as well as lose my coaching position,” he said. “I admit I did not need to be out in public after having some beers. I guess I was probably in the wrong there. After that mistake, I still felt that the amount of time and effort I put into the program would outweigh my mistake. The administration disagreed, unfortunately, as a lot of people were disappointed and bummed at the decision.”

Hackenmueller said it was hard for him to have to leave the program after the time and effort he spent coaching.

“Life apparently will go on, and I do believe there is something bigger and better for me out there, but for the time being I am going to continue being a fan and a coach from a distance as these Albert Lea kids strive to do something no Albert Lea team has done in a long time,” he said.

Hackenmueller apologized to the Goodnature family for the incident.