Tigers dominate in first round 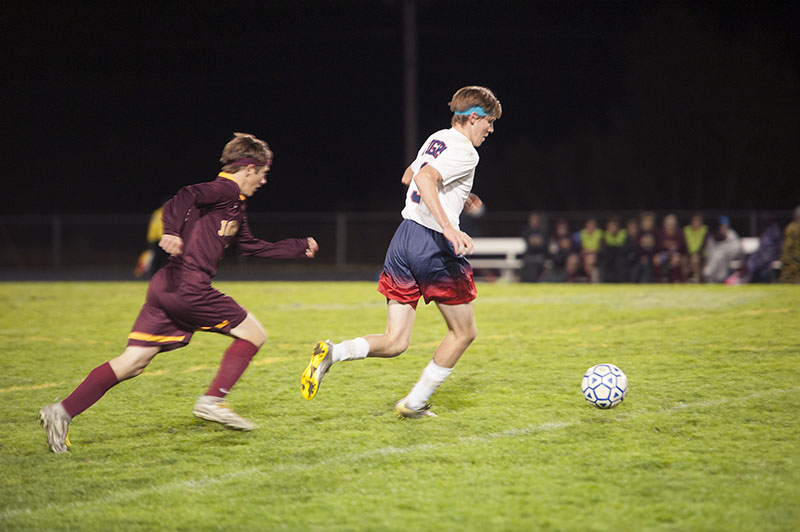 Senior Josh Englin dribbles the ball past a Jordan defender Monday night. The Tigers went on to easliy defeat the Hubmen 8-0 and move on to round two of the section playoff. - Tyler Julson/Albert Lea Tribune 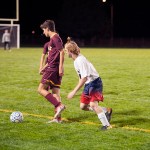 Albert Lea senior Noah Karge sneaks in to steal the ball away from an unsuspecting Hubman. The Tigers advance to play Marshall on Thursday. – Tyler Julson/Albert Lea Tribune 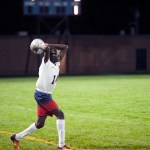 Albert Lea junior Phillip Ter tosses the ball in play after a Hubman kicked it out of bounds. Ter had one goal on the night. – Tyler Julson/Albert Lea Tribune 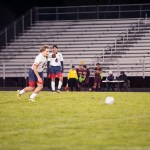 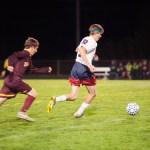 Senior Josh Englin dribbles the ball past a Jordan defender Monday night. The Tigers went on to easliy defeat the Hubmen 8-0 and move on to round two of the section playoff. – Tyler Julson/Albert Lea Tribune

The Albert Lea boys’ soccer team hosted Jordan for the first round of section playoffs Monday night. There was never any doubt as to who was in control of this match as the Tigers sailed to an 8-0 victory over the Hubmen.

After a heartbreaking loss less than one week ago, the Tigers started this match with a chip on their shoulder ready to redeem themselves. It didn’t take long for the scoring to get started as senior Lennon Shimon scored the first goal of the match not even 10 minutes into play. Shimon added another goal to his total only a couple minutes later, putting the Tigers up 2-0.

Freshman Dante Lopez would find the back of the net not long after for his only goal of the night, giving the Tigers a three-goal lead midway through the first half.

Albert Lea would take that 3-0 lead to the halftime break, and they wouldn’t stop there. Coming back after the break, senior Lay Wah scored a goal to give the Tigers a 4-0 lead with more than 30 minutes left to play.

Shimon would complete the hat trick only a few moments later, scoring a breakaway goal and putting the Tigers up by five. Once again Shimon would score another goal minutes later to make it twice on the night where he scored back-to-back goals within two minutes of one another. He then had four goals and the Tigers lead by 6.

With about 20 minutes remaining in the match junior Phillip Ter got one by the Jordan defender for his first and only goal of the game and all but securing a win for the Tigers. Keith Grzybowski would add another goal for good measure after booting in his first score of the season.

In the net for the Tigers was senior Levi Kermes in the first half and junior Jayden Emerson in the second. For what few shots the Hubmen took at the goal, the duo was able to stop every attempt to preserve the shutout.

Albert Lea controlled nearly every aspect of play from start to finish. They dominated time of possession and were able to keep the ball on the Hubman side of the field for much of the match.

Head coach Zachary Luther talked about the game and the momentum moving forward.

“Coming out after a tough loss last week, it was good to see everyone ready to go 100 percent,” he said. “Being able to finish and everyone still playing at a sharp level going into our next round is big, very important.”

The Tigers advance in the section tournament and will travel to Marshall on Thursday.