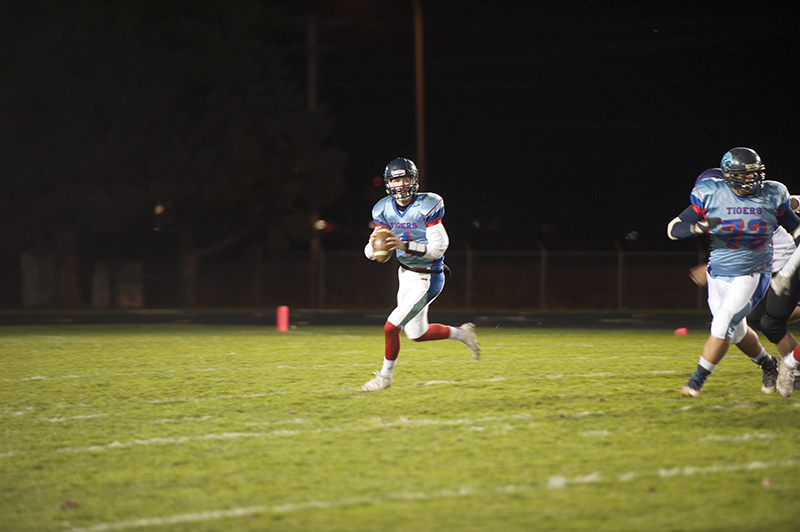 Albert Lea senior Alex Goodmanson rolls out to avoid a sack against Red Wing. The Tigers would go on to lose to the Wingers, 20-16. - Tyler Julson/Albert Lea Tribune

Albert Lea football puts up a fight, but falls to Red Wing in playoffs

The Albert Lea football team hosted Red Wing in the first round of the Section 1AAAA tournament on Tuesday. Despite leading a majority of the fourth quarter, the Tigers couldn’t come up with a win as they fell to the Wingers, 20-16.

The Tigers opened up the game with an unexpected onside kick, but it paid off as they recovered the ball and went down the field to put points on the board on their opening possession. They took a 3-0 lead after a made field goal by sophomore Ismael Cabezas.

The Wingers would score just a few possessions later and after an unsuccessful PAT try, they led the Tigers, 6-3.

With under three minutes to play in the first half, Albert Lea recovered a Winger fumble at their five-yard line. Junior Cole Wentzel rushed for a three-yard touchdown just two plays later to take a 10-6 lead.

However, Red Wing would take advantage of a penalty on its next possession and score on a short touchdown run to take a 12-10 lead. Albert Lea went to halftime trailing by a manageable two points. 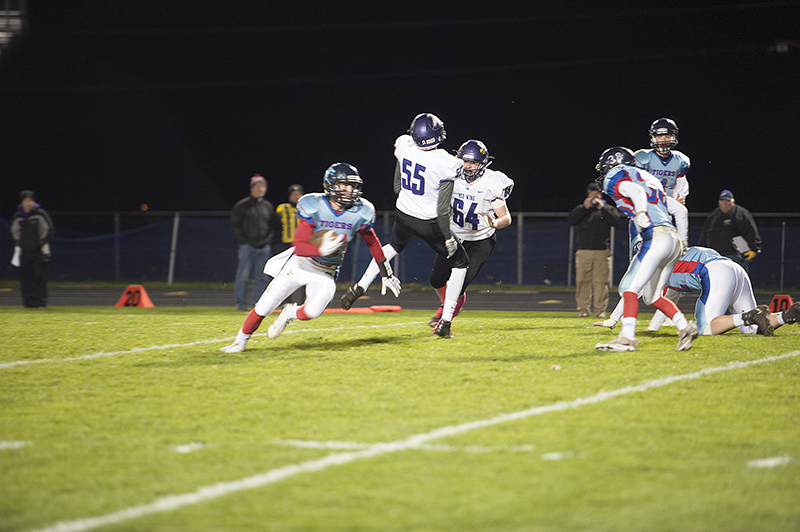 Albert Lea junior Cole Wentzel gets the handoff late in the first half against Red Wing. Wentzel scored later in the drive on a three-yard rush. – Tyler Julson/Albert Lea Tribune

After a mishap on the first play of the fourth quarter, the Tigers gave the ball away inside of Winger territory and gave up an opportunity to put the game away. The Wingers would take advantage of the Tigers turnover and march down the field to score with six minutes remaining in the game. The Wingers took a 20-16 lead after a successful two-point pass.

Despite another nice return by Simon, Albert Lea would be unable to capitalize on good starting field position. The Wingers would get the ball back and, after a first down, were able to run the clock out.

Head coach Corey Black talked about the Tigers’ performance after the game.

“Our defense played really well tonight,” he said. “Our offense had some big plays, as well. Unfortunately, we were just unable to make the plays that we needed to down the stretch when is really mattered.”

Albert Lea finishes the season 0-9, but has made some definite improvements from the beginning of the season.

“We’ve made some huge strides from the beginning of the year,” Black said. “We’ve come from guys not really knowing exactly what their assignments were to guys making big plays on both sides of the ball.

“It’s been a lot of fun to watch this defense improve from week to week and watch these guys step up into some pretty big roles on the team. I’m proud of the team and the steps we’ve taken this year.” 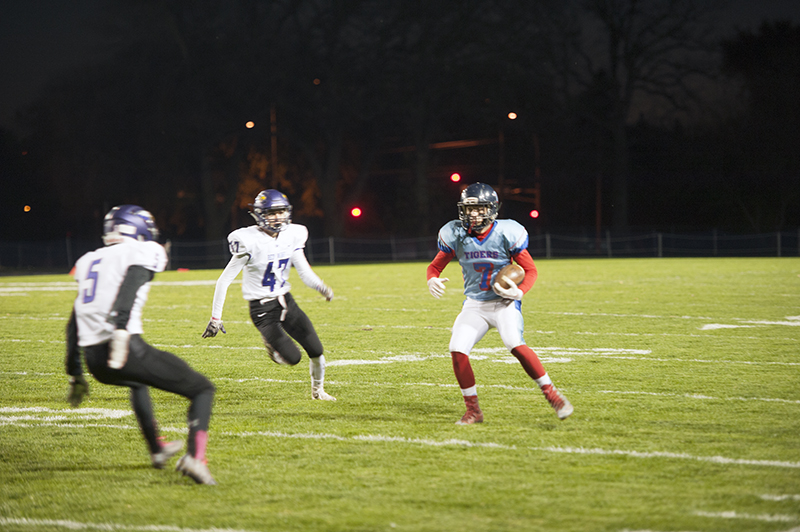 Albert Lea junior Spencer Doyle catches a pass early in the game against Red Wing Tuesday night. The Tigers would lose to the Wingers 20-16, after giving up a late touchdown. – Tyler Julson/Albert Lea Tribune