A Walters man who allegedly assaulted a woman he knew last weekend was charged with a felony on Monday in Freeborn County District Court. 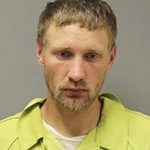 Court documents state Stafne was charged after a deputy responded to a report of a domestic assault before 2 a.m. Sunday at an address in Freeborn.

The alleged victim had blood on her and a long scratch from her neck to her chin.

Court documents state Stafne had a paper towel or tissue wrapped around one of his fingers that was bleeding and had two red marks on his face. He reportedly stated his finger injury came from a work incident.

Stafne, who was on probation with the Department of Corrections at the time of the incident, reportedly tested positive for alcohol and was arrested.

The alleged victim said Stafne became angry while they were at a bar. She alleged Stafne put his hands around her throat twice during an argument after they returned home.

Court documents state Stafne said he grabbed her after she left the residence.

In an interview the following day, the alleged victim said Stafne put pressure on her neck, holding her around her neck for 30 to 40 seconds.

Stafne and the alleged victim reportedly both showed signs of alcohol consumption.

District Court Judge Steven Schwab released Stafne on his own recognizance. His next court appearance is scheduled for Oct. 12.

He faces a maximum sentence of three years in prison.