An Albert Lea man who allegedly robbed someone he knew earlier this month was charged with one felony in Freeborn County District Court. 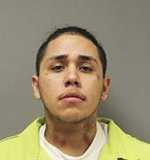 Rodolfo Valdez, 20, is charged with first-degree aggravated robbery. His first appearance on the charge was Monday after he was arrested on a warrant.

Court documents state Valdez was charged after two Albert Lea police officers were dispatched the evening of Nov. 7 to speak with an alleged robbery victim.

Valdez allegedly came to the person’s house regarding a surround system that was for sale and drove a blue Chevy Trailblazer to his mother’s house so she could view it before he bought it.

Valdez reportedly never entered his mother’s house, grabbing the sound bar while another person in the vehicle grabbed a subwoofer.

Court documents state Valdez grabbed a 3-foot silver metal pipe, walked up to the alleged victim, pulling the pipe back like he was going to strike the person and threatened to beat him up if he told anyone.

Inside the car Valdez used, officers reportedly saw items described by the alleged victim as items taken from him.

District Court Judge Steven Schwab set conditional bail at $50,000. Valdez’s next court appearance is scheduled Nov. 30. As of Monday afternoon, he was in custody.

First-degree aggravated robbery carries a maximum sentence of 20 years in prison and a $35,000 fine.