Ambassador of the year 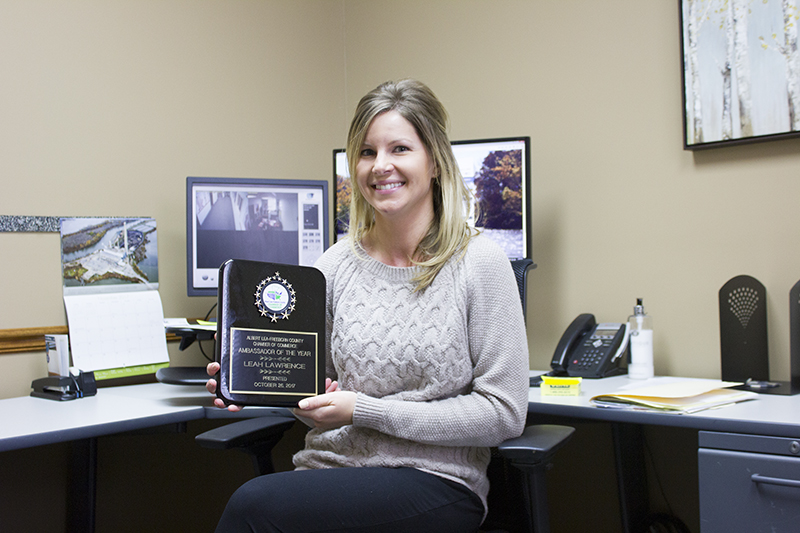 The administrative assistant at the Shell Rock River Watershed District is being recognized for her role in the betterment of Albert Lea lakes and the promotion of local businesses.

Leah Lawrence was named Albert Lea-Freeborn County Chamber of Commerce Ambassador of the Year Oct. 26 at the chamber’s annual dinner.

“It’s a special honor to be rewarded for the commitment I’ve made to be an Ambassador,” she said. “It’s a commitment to attend a lot of meetings and ribbon-cuttings and groundbreaking ceremonies, so it’s nice to be recognized for the hard work that I’ve put into it.”

In her role at the Watershed District, Lawrence assists leaders Brett Behnke and Andy Henschel. Lawrence is in charge of preparing the agenda and other paperwork for board meetings and works on outreach and marketing.

She said she has developed a passion for the district’s mission of cleaning area lakes.

“Our lakes are right in the middle of town, so it’s important for clean water, recreation, tourism — it’s kind of like the life of Albert Lea. It’s important that we keep it healthy for our future generations.”

Lawrence, who started working for the Watershed District in January 2015, is a St. Paul native who called Albert Lea “a great place” to raise her children. She recalled fun activities the community provided for her children when they moved here.

She said she believes Watershed District efforts have led to cleaner lakes, allowing for increased fishing and boating opportunities.

“It’s fun to be a part of the change that’s happening,” said Lawrence, who noted her appreciation of the community aspect of her position at the district.

“We are working with the people and for the people,” she said.

The chamber represents more than 450 local businesses. The nine-person Board of Directors at the chamber includes representatives from businesses around the community.

The organization is being led by interim Executive Director Tom Newell as Randy Kehr recovers from surgery.