Business thriving since expanding to Glenville 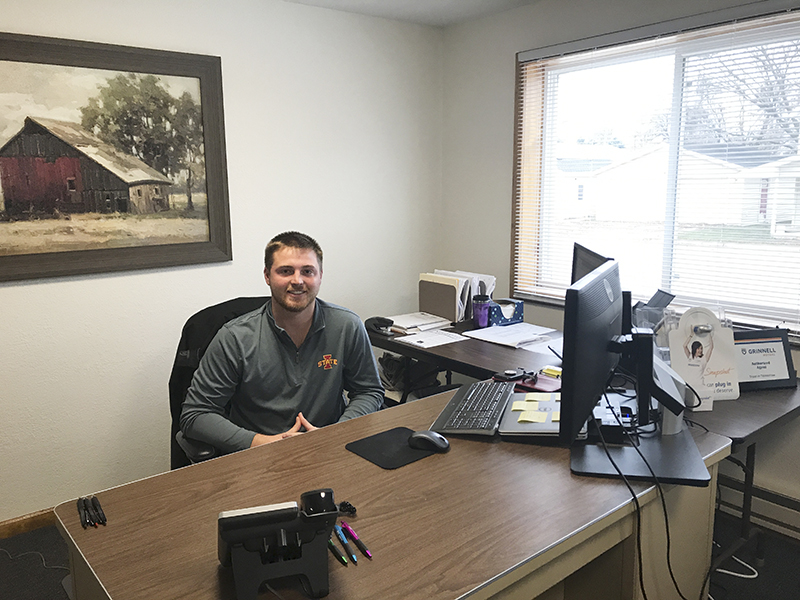 Jayson Olson has become the fourth generation of his family to own Worth Mutual/Olson Insurance. He opened the Olson Insurance office in Glenville in March 2016. - Kelly Wassenberg/Albert Lea Tribune

GLENVILLE — A fourth-generation Northwood business has seen continued success since expanding to Glenville.

“We’ve always sold insurance in Minnesota, but nobody really knew it before we put an office up here,” Jayson Olson said.

Olson is the great-grandson of Glenn Tenold, who began what is now Worth Mutual/Olson Insurance in 1882 in Northwood. Since those days, ownership of the business has stayed in the family, passing to Olson’s grandfather, Jerry, who recently retired; and his father, Kory, that now co-owns the company with him.

The company still operates out of its original location in Northwood and also has an office in Manly, Iowa. Olson opened the Olson Insurance office in Glenville in March 2016 after graduating from Iowa State University the previous December.

Olson said business has been going very well, and there are no immediate plans to expand the company to more offices. He covers the gambit when it comes to insurance — automotive, home, business, health and farm/crop insurance.

As an Olson family member, he hopes to keep the business in the family for a fifth generation. As an insurance agent, he encourages people to shop around.

“If you have been with the same company for however long, it doesn’t hurt to stop by and get a quote from someone else,” Olson said.

He also encourages policy holders to sit down with their insurance agent regularly.

“It’s always good to go in with your agent, at least yearly, and go over your complete policy,” Olson said. “Figure out farm blankets, figure out if you bought any new machinery or if some of the machinery that is on there needs to be taken off.”

This policy review can ensure that policy holders have the proper coverage without paying more than they need to.

If anyone has questions, Olson invites them to his office.