Visitation will be from 4 to 7 p.m. Monday at Faith Lutheran Church in Madelia.

A memorial service will be at 11 a.m. Nov. 28 at Faith Lutheran Church in Madelia. Visitation will be one hour before the service. The Rev. Salim Kaderbhai will officiate. 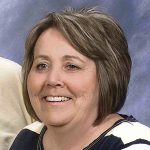 Arrangements are with Sturm Funeral Home, Pilgrim Chapel in Madelia. Online condolences may be left for the family at www.sturmfh.com.

Carol Jean Stevens was born to Herschel and Ruth Stevens on June 21, 1954, in Albert Lea. Carol grew up in Albert Lea and was a graduate of Albert Lea High School in 1972. After high school, she went on to work at Land O’ Lakes for several years.

She was married to Aaron Kuennen on March 18, 1978, at First Lutheran Church in Albert Lea. The couple moved to Lewisville, where they made their home for several years and raised their three daughters. Carol worked as the church secretary at the Presbyterian church in Madelia, as well as a teller at Merchant State Bank in Lewisville. They moved to Albert Lea, where Carol worked for many years as a medical abstractor at Mayo Clinic until her retirement in August 2016. Aaron and Carol then moved back to Madelia to be near their family and grandchildren. Carol was a matriarch to her family. She was a leader and guide in many ways. She loved spending time with her friends, family and especially her grandchildren. She will be dearly missed by all who knew and loved her.