Donald Dale Schou, 93, of rural Albert Lea, died Thursday, Nov. 2 at St. Marys Hospital in Rochester following an injury in the fall. His funeral will be at 10:30 a.m. Wednesday at Trinity Lutheran Church in Albert Lea. The Rev. Eileen Woyen will officiate.

Visitation will be from 5 to 7 p.m. today at Bonnerup Funeral Service and one hour prior to the service at Trinity Lutheran Church. 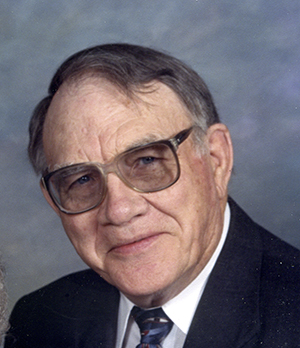 Don was born April 21, 1924, in Redwood Falls to Soren ‘Sam’ and Amelia (Johnsen) Schou. His parents divorced when he was very young, and he grew up in Sleepy Eye with his mother, younger brother and grandparents. He graduated from Sleepy Eye High School in 1942. He attended Dana College in Blair, Nebraska, for one year before enlisting in the army in 1943. He served in the United States Army Air Corps as a cryptographer. He sailed over to Europe on the Queen Mary in March 1945 and volunteered for an assignment with the French Air Corps in Strasbourg. After the war in Europe was over, he was assigned to duty in Meersburg and Herzogenaurach. He was honorably discharged in April 1946. He returned to Dana College to complete his education, receiving a Bachelor of Arts Degree in history in 1949. While there, he met Eleanor Nielsen of Albert Lea, and they were married Dec. 28, 1948, at Trinity Lutheran Church.

Don taught school in Janesville for two years before settling in Albert Lea, where he worked first for the Freeborn County Highway Department and then for the Soil Conservation Service until 1965, when he became self-employed as a drainage engineer. He retired when he was in his early 80s. He also farmed north of Albert Lea. He loved being on a tractor doing fieldwork, and he was proud of the fact that he was still able to chisel plow at the age of 90.

When he was no longer able to do fieldwork, he derived great joy in watching the progress of planting and bringing in the harvest. He also worked for a few years as a substitute mail carrier.

Don enjoyed traveling. He took his family on camping trips every summer, and after his children were grown, he enjoyed taking trips to Europe with his wife and daughter, Deb. He especially loved train travel. He also loved to read, especially spy novels and anything about World War II. He enjoyed sports, especially football. He played on both offense and defense as a lineman in high school and college. He loved the Vikings and Gophers, and he was able to go to a World Series game in 1987.

Don was a faithful member of Trinity Lutheran Church. He was proud of his Danish heritage. He loved talking to people and could strike up a conversation with anyone anywhere.

More than anything­, Don loved his family. He and Eleanor had seven children, “the best crop I ever raised.” He was also proud of his six grandchildren and six great-grandchildren.

Memorials may be given to Trinity Lutheran Church, the Danish American Archives and Library or to the charity of the donor’s choice.