Drama director to retire after 33 years with Wells student plays 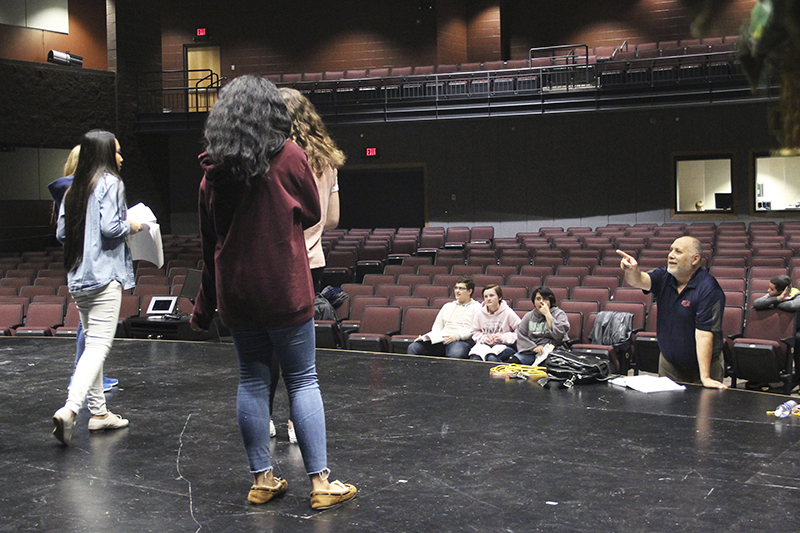 WELLS — The United South Central High School drama director is putting the final touches on a fairy tale, and then it’s curtains down on his time as the theater’s leader.

Clay Miller has been the drama director in Wells for 33 years and saw the program through the merger and into the new United South Central High School building in 2014-2015. Miller started directing shows after he quit his role in a cover band and needed a creative outlet.

“It was actually the school that actually approached me rather than the other way around,” Miller said. “Someone gave them my name and thought that I would be interested in it, good at it, and I was too naive to know any different, so I took on the challenge and (I’m) still here. Something that I thought would be temporary ended up being, as I said, 33 years.”

During that time, Miller said he has applied several areas of experience to the position. He moonlights as the theater director, while during the day he works as a drafting manager at Wells Concrete. His experience in the drafting world helps him design and build sets. Miller also had some theater experience through high school and community shows as well as an electronics background that helped him with sound and lighting.

“I was able to bring a lot of things to the table,” Miller said. “Small-school directors have to wear many hats.” 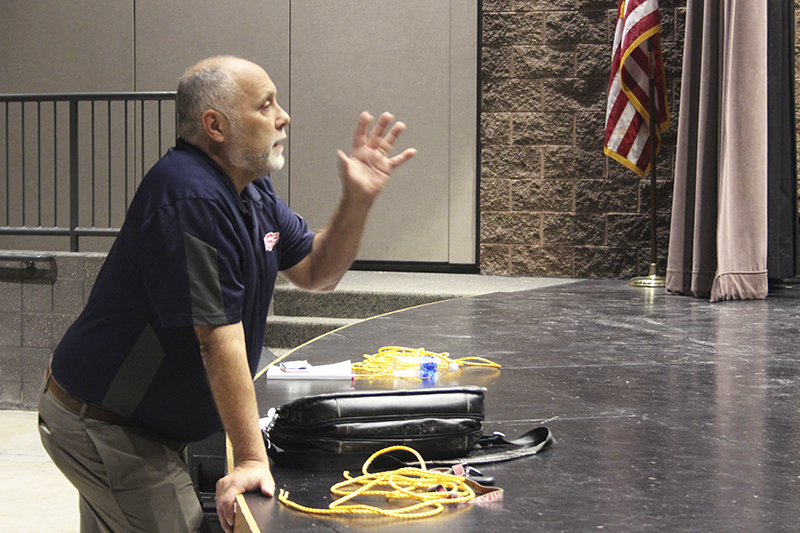 While Miller has had help with costumes and some of the tech involved in his current show, he has tackled a large portion of each show’s diverse jobs himself.

“I had to wear all those hats,” Miller said. “I had to do the set designing, I had to do the blocking. I also handled any of the, the vocal work that the kids do for musicals.”

Miller’s daughter, Kirstyn Wegner, said Miller relishes the opportunity to be creative in this role. For “Beauty and the Beast” a few years ago, Miller created Lumiere’s candelabra costume out of garden supplies. He still rents out some of those costumes.

But with “Shrek the Musical,” Miller’s final show, he had some help with the choreography.

Miller’s son, Joey, who was involved in Miller’s theater program, acts at the Chanhassen Dinner Theatre, has worked at the Ordway Center in St. Paul and also works as a choreographer. He came down to choreograph Clay Miller’s production of “Shrek the Musical.” Miller said it has been rewarding to watch his son grow up and continue in theater.

“As with all my kids, they’ve been a very major, integral part of doing this,” Miller said. “And they’ve actually helped out with some shows, which I’ve always enjoyed, having them involved. But I would take them when they were little — I would bring them to rehearsals. So they got a taste of that firsthand.”

Wegner said it’s not just Miller’s kids that have stayed connected with theater in some way.

“I can’t tell you how many kids repeatedly come back after they graduate to help,” Wegner said. “… They just feel so comfortable there. It’s always been a place of acceptance, and he’s created that atmosphere.”

And for 33 years, working with the students was what kept Miller coming back.

“What’s fun is to really see them throughout the years, when they’re really green and really don’t know anything, and just really start to develop and to blossom,” Miller said. “And they become more comfortable on stage, and then, you know, pretty soon they really become quite skilled at what they do.” 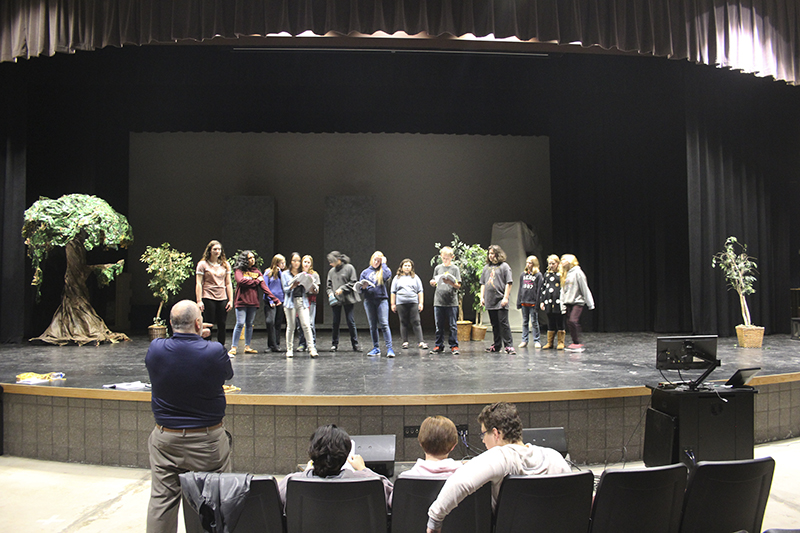 “React! React! React!” Miller told his musical cast during rehearsal. They were working on cast dynamic in the scene just before a musical number featuring choreography by Miller’s son. Sarah Kocher/Albert Lea Tribune

Although it’s not always easy (“Some days you just want to go out in the parking lot and fall on your sword,” he joked), it’s watching students grow and watching a production unfold the way he envisioned it that make it worth it.

Wegner said Miller’s ability to interact with students is what distinguishes him as a drama director.

“He’s really good at noticing talent in kids and drawing it out,” she said. “He has a real talent for that. Things that kids don’t even know they have, and I don’t think they necessarily always believe they can do it until they do it with him. It’s amazing to watch that transformation.”

United South Central High School Senior Brady Berg plays Shrek in the upcoming musical. He said his four years under Miller in the drama department have taught him many things.

“I’ve learned a lot more about how well confidence can get you along, like help you go much further than you think,” Berg said.

And in addition to carpentry skills, Miller’s dedication to the program is evident to Berg.

“He’ll find any moment available to be here,” Berg said. “… he comes here straight after work and on Saturdays and Sundays.”

Part of Miller’s decision to leave is to reclaim some of that time.

“For 33 years my wife has put up with, with me not being around, or we have to work our schedules around rehearsals and performances, so it’s going to be nice to be able to, you know, do things with her without those limitations,” Miller said.

But while he may be handing over the role, this won’t necessarily be the end of his involvement with the program. After all, it might be his daughter who fills the position next.

“I’m sure dad will probably step in and help pound a nail or two,” Miller said.

But until then, there is one show that still must go on.

“I’m really proud of him and the work that he has accomplished, and it is so rewarding to see the look on his face after a show is done,” Wegner said. “It’s just like, ‘We did it.’”

What: “Shrek the Musical”