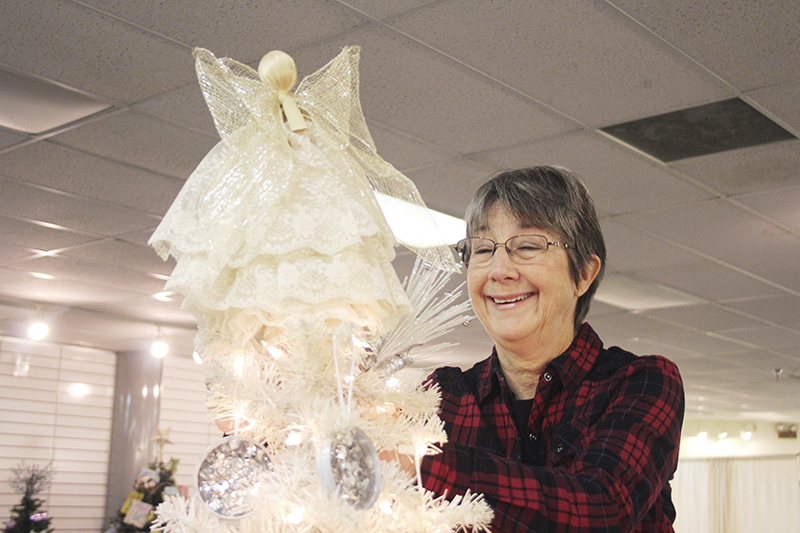 Lynn Koza keeps the angel upright with sprigs of tinsel-like decorations as she decorates for the festival of trees. - Sarah Kocher/Albert Lea Tribune

One Northbridge Mall suite is showing off a festive facelift a week later than usual this year.

The annual Festival of Trees, hosted by the Albert Lea Art Center, usually opens for the public with a Night of Dazzle the Saturday after Thanksgiving. This year, the event will take place on Dec. 2 instead. Darlyne Paulson, one of the chairs of the Festival of Trees, said this was in response to people who wished to make the event but couldn’t because they were out of town for Thanksgiving.

This year, the Festival of Trees will feature 35 trees put together by 29 decorators ranging from one by the Freeborn County Humane Society to another covered in intricately painted and dressed dolls handmade by 93-year-old Agnes Boss.

“It’s always fun to see what everybody comes up with,” Paulson said. 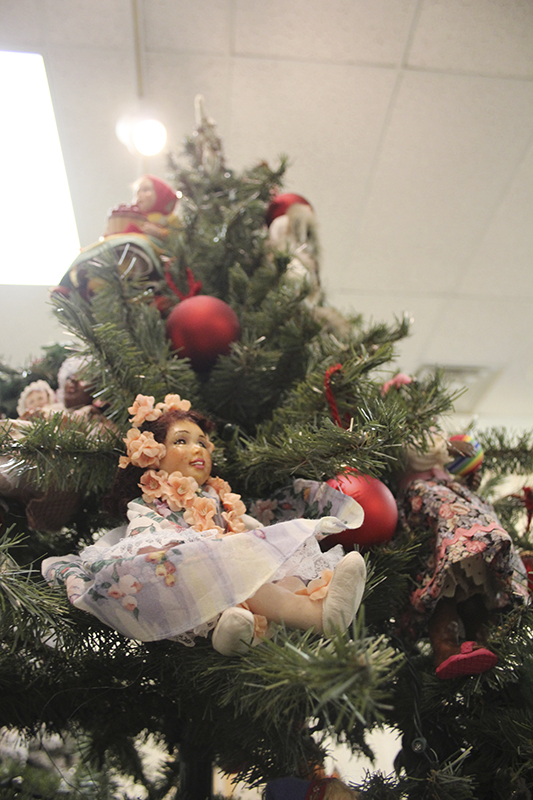 Most of the decorators are repeat participants, but Paulson said there are six new ones this year.

The theme for this year’s festival is “Joy to the world.”

“There just seems to be so much unrest in the world,” Paulson said. “We thought we needed to bring the entire world into it.”

The committee had its first meeting in July to begin lining things up: music, food, wine tasting, rentals and participants.

Susan Kruse and Lynn Koza decorated the Knights of Columbus Auxiliary tree on Nov. 18. They have been participating in the Festival of Trees for seven or eight years.

“We get compliments sometimes that make us come back,” Kruse said.

They worked to festoon their tree in mason jar lids swathed in clear, shimmery rhinestones and silver sequins made by members of the auxiliary.

“I have to admit, Pinterest comes through,” Kruse said. 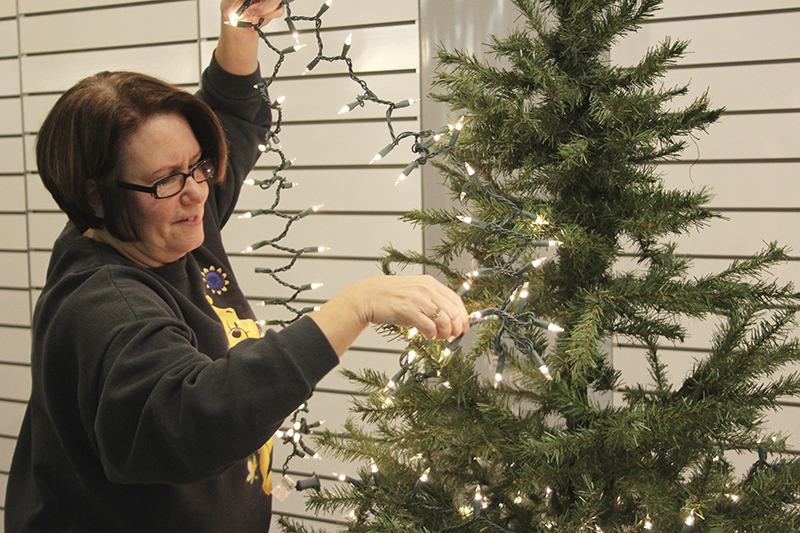 MaChar Kingstrom strings lights onto the Girl Scouts tree before filling it with string ornaments made by Girl Scouts. – Sarah Kocher/Albert Lea Tribune

That, and shopping estate sales for additional Christmas embellishments.

A few trees away, MaChar Kingstrom worked on the Girl Scouts’ tree. For her, the tree is an opportunity to let people know that the Girl Scouts are out there. Their tree is also covered with handmade ornaments: string balls made firm by glue and painted wood cross-sections of a tree branch or small trunk. Each string ball is tied to a small painted flag from different countries around the world to celebrate the theme. The Girl Scouts made two ornaments apiece in a session with Kelly Gau: one they could keep, and one that would be featured in the Festival of Trees.

“It’s getting the girls together at different age levels and just having fun,” Kingstrom said. Furthermore, it allows the girls a chance to be creative.

Kingstrom won’t decorate the back of the tree, and she’ll keep the ornaments of the littlest Girl Scouts hanging low on the tree so the girls can see what they’ve done.

“They’re so proud of them,” Kingstrom said.

Additionally, the event reminds the girls that they’re members of a community.

“They know they’re part of something bigger,” Kingstrom said.

Paulson also said participants in the Festival of Trees may feel similarly.

“I think it brings fellowship,” Paulson said. “It’s just fun to see people come decorate and the fun they have doing it.”