“Freeborn and Mower counties are my past, present and future,” he said. “As your representative, I will work tirelessly to ensure our district has a plan for fighting invasive species, agriculture runoff and soil conservation, clean and sustainable energy, bike path/roadway accessibility and a full-service, acute-care hospital in Albert Lea.” 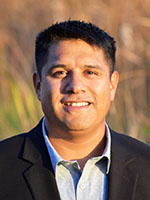 Martinez supports securing funding so Blazing Star Trail can be complete from Albert Lea to Austin and regaining a full-service, acute-care hospital in Albert Lea.

Local officials could have initially issued a moratorium to stop the transition of most inpatient services to Austin, said Martinez, adding a pro forma study being undertaken by Quorum Health Resources LLC could show the path local officials can take to a keep a full-service hospital in the community.

Martinez suggested if Mayo Clinic Health System remains in the community, specialized funding could be received to ensure most inpatient services can stay in Albert Lea, and he discussed challenging Mayo Clinic’s status as a tax-exempt, nonprofit organization.

Martinez said he supports forming a rural health care consortium that includes communities in Iowa, Wisconsin and Minnesota, adding the effort to keep a full-service hospital in Albert Lea would be a joint venture with local and state representatives.

Martinez has participated in a number of civic organizations, such as Eagles Club, DNR Star Pool League, the First Lutheran Church choir and is a two-time finisher of the April Sorensen half marathon.

Bennett won election for her second term in office in November 2016, defeating DFLer Gary Schindler by a nearly 25 point margin — 61.71 percent to 38.2 percent.

Martinez and his wife, Natalie, a public defender, have a 3-year-old daughter, Eleanor, and a 7-month-old son, Theodore. The couple is foster parents to a 10-month-old boy.

To help alleviate partisan gridlock at the Capitol, Martinez said compromise needs to be struck between Republicans and Democrats and a proper balance between spending and providing needed services must be in place.