Funeral services for JoAnn Nesje will be at 11 a.m. today at Bonnerup Funeral Service, 2210 E. Main St. in Albert Lea, with a visitation one hour prior. The Rev. Erica Cunningham will officiate. Interment will be at Our Savior’s Lutheran Cemetery in Kiester at a later date. 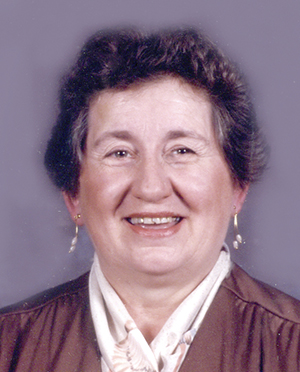 JoAnn married Selmer Joseph Nesje on March 12, 1954, in Wells. To this union, nine children were born. JoAnn loved spending time with her family. She was a clerk and manager of the Municipal Liquor Store in Kiester for 33 years.

JoAnn was an active member of Salem Lutheran Church in Albert Lea and a member of United Fund. She participated in bowling league for many years and always loved going dancing at The Bubble.

In her free time, JoAnn enjoyed watching Twins games, going out shopping or to the bank to “buy cash,” and getting manicures and pedicures with her daughters. She loved telling stories with great detail, reading books and working on word find puzzles. She looked forward to the holiday season, getting to watch Christmas movies on the Hallmark channel and inviting extra people over so that no one was alone for the holidays. She was dearly loved and will be dearly missed.

She was preceded in death by her husband, Selmer J. Nesje; daughter, Joyce Stack; parents Adrian and Margaret Kauffmann; and son-in-law, Marly Albers.