Funeral services for Kenneth E. Oman will be at 1 p.m. Tuesday at Bonnerup Funeral Service in Albert Lea. The Rev. John Holt will officiate. Visitation will take place one hour prior to the service. Burial will be in Greenwood Cemetery in Glenville. Military honors will be accorded by the Albert Lea area veterans organizations. 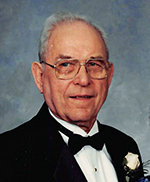 Kenneth passed away Tuesday, Nov. 21, 2017, at Hillcrest Rehabilitation Center in Mankato. He was 99.

Kenneth Emmanuel Oman was born July 24, 1918, to Casper and Ella (Storlien) Oman in Ten Mile Lake Township. He grew up and attended school in Dawson until the eighth grade, where he would then help his family on the farm. Ken was drafted into the United States Army and served from March 1942 until his honorable discharge in October 1945 at Fort Custer, Michigan. Ken received a Bronze Star medal for his service. Ken saw many things during his service, from D-Day to many recon missions behind enemy lines. He was proud of his military service.

On Nov. 4, 1943, he was united in marriage to Shirley (Johnson) in Freeborn County. To this union, three children were born. The couple would raise their family in Albert Lea.

After his discharge from the service, Ken would begin work at a filling station doing various jobs. He went to work at Page and Hill Homes building pre-fabricated houses for a number of years. Following, he would work at the Coca-Cola bottling plant in Albert Lea. Later, he would open his own Pepsi franchise in Albert Lea, where he would distribute to many locations in southern Minnesota. After he sold his Pepsi franchise, Ken worked for Krieger Beverage, doing anything they needed. He would work a few other jobs until his eventual retirement when he was in his late 80s.

As you can tell, Ken loved to work. From his early years helping on the farm in seventh grade, to his military service, to working many jobs in the Albert Lea area, Ken always had a great work ethic. He knew he needed to work, and he valued doing things the right way the first time. Aside from work, Ken enjoyed bowling, hunting and going dancing with his wife. Ken also took a liking to his family succeeding in music, as many of Ken’s family were together in the K Lee Stevens Band. Ken could be described as “Mr. Fix-It.” He could fix anything and everything, from carpentry or mechanical, to plumbing or electrical, he would find the problem and always had a solution to fix it. Aside from those activities, he was a member of the American Legion and Veterans of Foreign Wars.

Ken is preceded in death by both parents; his wife, Shirley, in 2008; daughter, Susan Weberg; along with 12 brothers and sisters.