Larry Dewayne Trampel, 75, passed away peacefully Monday, Nov. 20, 2017, in his St. John’s Lutheran Community apartment at Water’s Edge in Albert Lea with his wife, Bonnie, by his side after a short battle with ALS.

He was born Feb. 26, 1942, in Klemme, Iowa, to Harmen and Eula Trampel. He grew up in Meservy, Iowa, and graduated from Thornton High School. He later earned his accounting degree from Hamilton Business School in Mason City. He married Bonnie Schacko on May 30, 1965, in Walters. 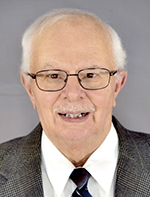 He became a certified public accountant and worked for Bertram Cooper and Co., which was later acquired by Larson Allen. Larry retired April 30, 2011.

Larry was preceded in death by parents Harmen and Eula Trampel; parents-in-law Norbert and Betty Schacko; and brother, Darrell Trampel.

Larry served in the National Guard for several years, including training in Alaska. He was very active in his community, volunteering much of his time. He was a member of the Sertoma Club and held several positions in the organization. He was the finance officer for Albert Lea American Legion Post 56. He was an active member on several boards, including the Albert Lea Public Library, Salvation Army and St. John’s Lutheran Community boards. He was instrumental in assisting with the development of the new St. John’s Community, where he and Bonnie lived.

Larry was a faithful Christian and very involved with his church. He was a treasurer, a member of the commission and a member of the welcome ministry team. He volunteered and was always available to help make lefse, serve loaves and fishes, load the Lutheran World Relief van and anything else the ladies at church asked him to do. Larry enjoyed bowling, playing softball, golfing, working in his garden, going for walks, putting together puzzles and riding bikes. He really enjoyed the trips he and Bonnie were able to take together during their retirement years. His favorite place to travel was Colorado. However, his greatest enjoyment was time spent with his family.

The memorial service will be at 11 a.m. Monday at First Lutheran Church in Albert Lea. The Rev. John Holt will officiate. Interment will be at Graceland Cemetery. Military honors will be accorded by the local servicemen’s organizations. Visitation will be from 5 to 7 p.m. Sunday at Bonnerup Funeral Service in Albert Lea and one hour prior to the service at church.

Memorials are suggested to Mayo Hospice in Albert Lea or First Lutheran Church.

Larry was loved and will be greatly missed by not only his family, but by his many friends. “We have been blessed to have him in our lives,” they said.