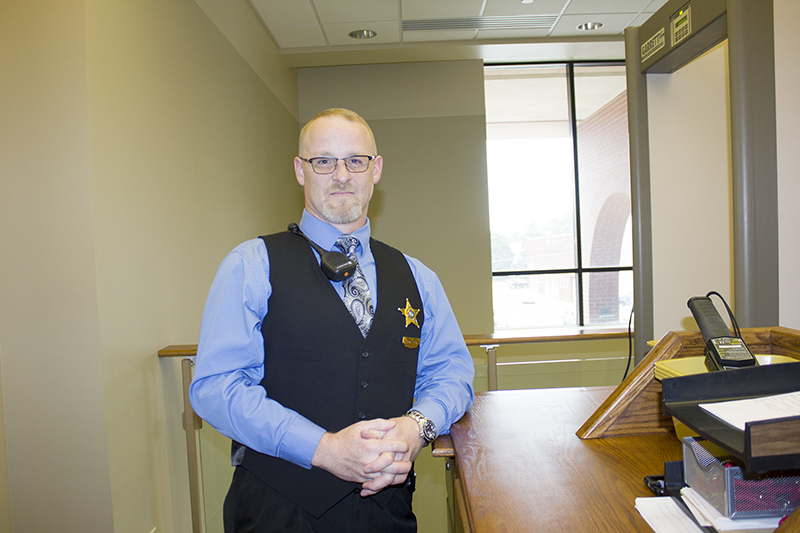 After more than 20 years in the Air Force, a local man is continuing his mission to protect and serve.

James Everhart, 42, is an assistant court security officer at the Freeborn County Government Center. In his position, Everhart provides security in the court environment by screening people to ensure they are possessing no weapons and making sure phones and bags are kept out of courtrooms.

“It lets the people that are in the courtroom see that nobody’s got anything on,” he said. “They’re not hiding anything, they’re not bringing anything in there with them, so it gives them a little bit more of a sense of security knowing that everybody’s been through here, has been screened. And it makes them feel a little bit better.”

Everhart grew up in the Austin and Albert Lea area and began his public service career shortly after he graduated from high school in 1994 when he enrolled in basic training. Beginning his military career as a law enforcement patrolman, Everhart transitioned into a firearms instructor before spending his last 10 1/2 years in meteorology.

“Military takes you around the world,” he said. “I went to several places, not just as an assignment, but just for deployments and everything like that.”

Everhart served in Turkey for more than one year as a firearms instructor before coming back to the United States, stationing for 18 months at Travis Air Force Base in California.

Everhart was promoted and decided to cross train.

“At the time, I only had three jobs open to me, and weather was one of them,” he said. “That was the one that piqued my interest the most.”

Everhart embarked on a five-days-a-week, six-month process at a technical school. After graduating, he spent 3 1/2 to four years at Scott Air Force Base in Illinois, where he helped provide weather information for 34 active-duty locations and more than 150 guard and reserve units.

Everhart later spent one year providing weather information at an Air Force base in Korea before spending the last 2 1/2 to three years of his military career at Peterson Air Force Base in Colorado Springs, Colorado.

After graduating from high school, Everhart said he joined the military because there were not a lot of job opportunities in the area and his family did not have enough money to allow him to  attend college.

“I thought I was just going to do my four years and get out, and it became a lifestyle, I guess,” he said.

Before he retired, Everhart earned two associate degrees and began to pursue his bachelor’s degree in management from National American University. He hopes to earn a master’s degree in emergency management and homeland security through an online program at Arizona State University.

Everhart said his court security job allows him to interact with people and engage in camaraderie similar to the military.

To Everhart, the United States provides freedom, and serving allows him to express that.

“There’s a lot of different variations of that, and people will choose to express their variation of what freedom, or how they feel about the country their way, and I’ll do it my way,” he said. “I chose to express it by serving in the military and still choosing to serve my community and the public by working in this position that I am in right now.

“It gives me the sense of pride and satisfaction that I am doing everything that I can for our neighbors and our country.”