A memorial mass for Randy Kehr will be at 11 a.m. Wednesday at St. Theodore Catholic Church in Albert Lea. The Rev. Kurt Farrell will officiate. Visitation will be from 5 to 8 p.m. Tuesday at Bonnerup Funeral Service, 2210 E. Main St. in Albert Lea, and again one hour prior to the service at church.

Randy George Kehr, 69, passed away peacefully on Thursday, Nov. 23, 2017, at Mayo Clinic in Rochester after his battle with cancer. 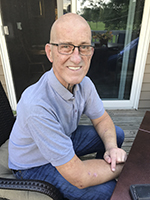 Randy was born July 15, 1948, to parents Gilbert and Marcie (Holmes) Kehr in Minneapolis.

On Sept. 19, 1970 Randy married Ellen Quinlivan at St. Theodore Catholic Church in Albert Lea. Together they raised their children in Kansas City, Missouri, before coming back to Ellen’s hometown of Albert Lea in 1996.

For more than a decade he served Albert Lea as the executive director of the Albert Lea-Freeborn County Chamber of Commerce, serving on many community boards and committees, as well as welcoming many newcomers to the community.

Randy loved people and loved helping people, which led to him receiving the Volunteer of the Year award and serving with his wife as chairpersons of United Way.

Randy’s other passions include a love of sports, including coaching softball for many years in Kansas City.

He supported the local theater, serving as president of the board.

Randy also had a soft spot for animals, including his dogs, and enjoyed giving his time to the Humane Society of Freeborn County.

He was an instrumental pillar in the community and has made a profound impact on Albert Lea.

He was preceded in death by his parents Gilbert and Marcie Kehr; brother, Pat Kehr; father-in-law, Gordon Quinlivan; and brother-in-law, Dan Quinlivan.

In lieu of flowers, please give back to the community in time, talent or money to a charity you are passionate about as Randy did.