‘Those kids are awesome’ 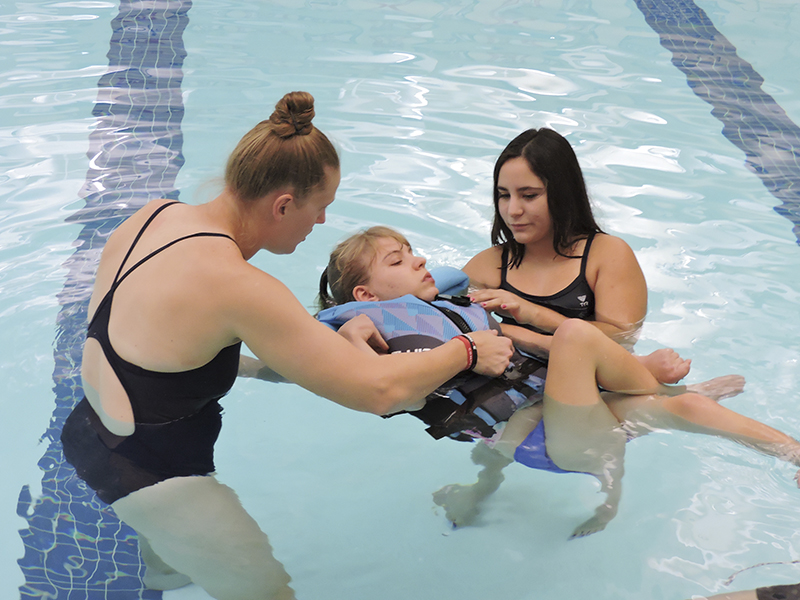 Albert Lea High School student Gracie Studier and DAPE teacher Gina Klennert help a DAPE student turn from lying on her back in the water to her stomach and back again. - Kelly Wassenberg/Albert Lea Tribune

Sometimes baby steps for one person, can equal a giant leap forward in the life of another.

Starting this year, Klennert hand-selected a number of students to come work with one of her DAPE classes to swim once a week during their regularly scheduled study hall periods.

Many of the students chosen were selected because they are upperclassmen with aspirations of working within the education system or in the medical field. 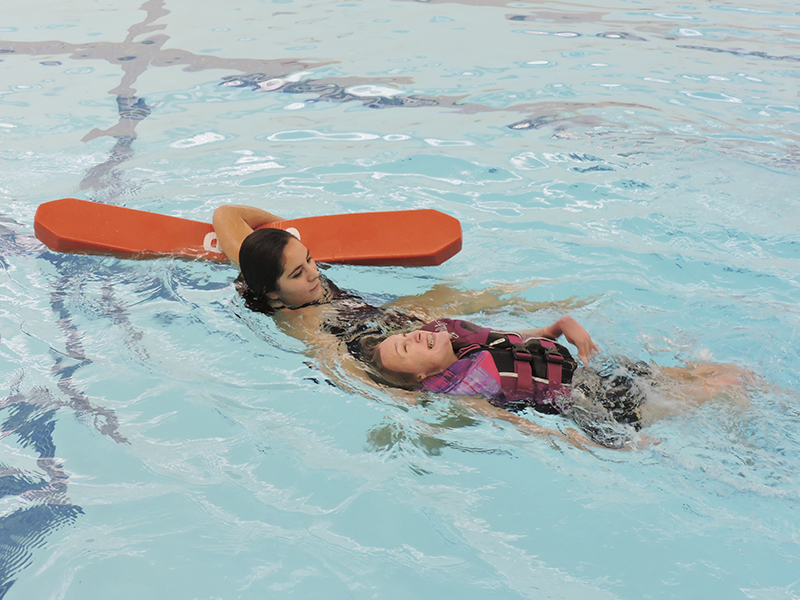 Gracie Studier leads Lindsey Rognes back into the shallow end of the pool after Rognes was tossed off the diving board at her own request and under her mother’s direction. – Kelly Wassenberg/Albert Lea Tribune

Finding general education students who were the right fit for her DAPE students was an important step for Klennert, as she said the feedback of how things go this semester could shape the way things could be done for the second semester. Yet, she feels the earliest a student may be able to sign up for an official unified PE class would be next year.

The benefits of such a program, Klennert said, would be far reaching.

Without additional hands in the pool, taking a group of wheelchair-bound students into a pool would be difficult. The extra sets of hands other students provide helps the logistics of utilizing the pool.

This opens many doors for the DAPE students.

First of all, is the safety component. While the DAPE students all wear life jackets, they are still taught how to go from their back to their stomach or their stomach to their back, whichever position is deemed safest for their level of mobility.

It also serves the purpose of the class, developing physical skills.

Klennert noted one student in particular who uses both a walker and a wheelchair to aid in his mobility.

“For him to be standing in the water and be able to have (not only) weightlessness, but also have the resistance of the water when he’s trying to walk — it’s perfect,” she said.

Then there is the social aspect. Many wheelchair-bound students are taught in more self-contained classrooms, which limit their exposure to their same-age peers.

“They kind of get forgotten,” Klennert said. “And I don’t think that does them justice, because they’re great kids. My adaptive classes are the highlight of my day because those kids are awesome.”

It’s Klennert’s hope that relationships forged in her pilot program, and in the potential unified physical education class, would spill out into the halls of the school and help diminish some of the stigma that surrounds having a disability.

Klennert believes there are benefits of the program for general education students, as well. 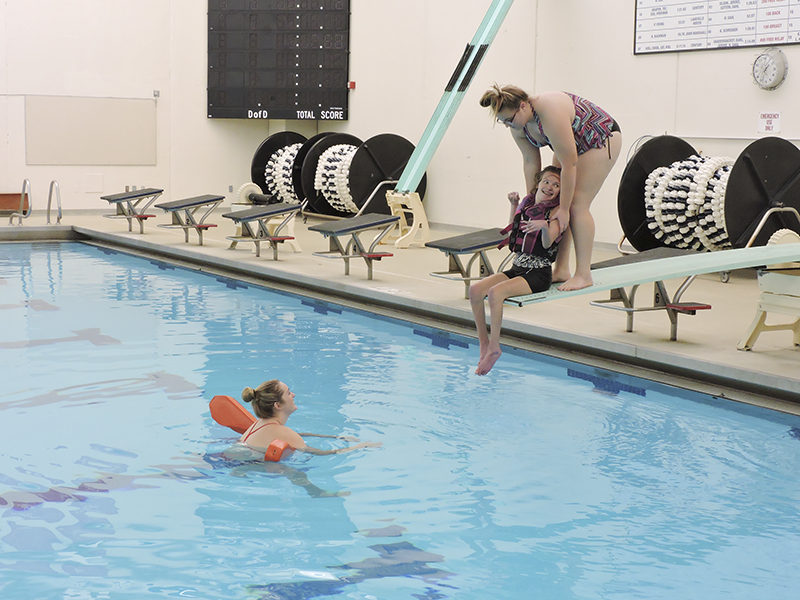 DAPE student Lindsey Rognes makes sure her mother, Beck Rognes, is watching from the sidelines as Khira Hacker helps toss her off the diving board as Rognes requested. Emily Taylor waits in the water for Rognes to accompany her. – Kelly Wassenberg/Albert Lea Tribune

“I think the students coming out of their study halls get more out of this than they originally anticipated,” Klennert said. “I think it gives them a little bit of a perspective so they kind of understand what a day in the life of someone with a disability looks like, feels like. But it also gives them a leadership role where they kind of mentor another student because they’re all upperclassman.”

Klennert said an official class would be much more formal than the pilot program she’s running now.

Students at the school would be able to sign up for the daily class, though class enrollment might have to be limited.

“If they sign up for this class, they’d come down every day,” she said. “We’d be able to partner up, kind of like a one-to-one buddy system and ‘Alright we’re playing basketball today and this is what it’s going to look like.’”

Klennert said she would be making adaptations so the student who utilizes a wheelchair would be able to participate just as well as the students who don’t need any modifications made to their programming.

In the beginning, Klennert said the class would probably only cover wheelchair-bound DAPE students, but she would love to be able to expand the program over time to include those with developmental disabilities.

While Klennert still eagerly works out the details of creating a unified PE class, the students volunteering for the program are already providing the positive feedback needed to drive the idea of the class into a reality.

Gracie Studier, Khira Hacker and Emily Taylor each noted their pleasure in being approached by Klennert to participate.

Studier was already friends with DAPE student Lindsey Rognes, who frequently reminds her when they have swimming planned for the next day. She has also volunteered at The Arc of Freeborn County doing different activities, including the Night to Shine event.

“I’m loving it,” Studier said of the program.

Fellow student Khira Hacker aspires to be an obstetrics nurse at the University of Minnesota. Along with seeing how happy the students are to have the opportunity to swim, Hacker said she looks forward to seeing them grow as individuals as they make progress throughout the year.

As a member of the swim team, Emily Taylor is no stranger to the water. She said she had no doubts that the program would be fun from the start, but as someone who looks forward to having a career as a teacher, she said she enjoys working with the students.

While the logistics of the program are details that will have to be worked out over time, so far the positive benefits for all who would be involved in such a program are already evident. 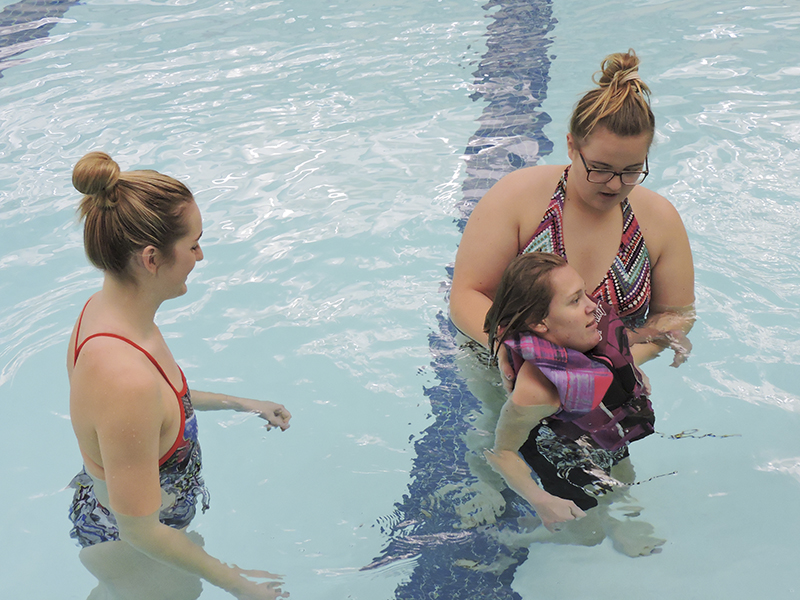 Lindsey Rognes, whose primary diagnosis is cerebral palsy, crawls or uses a walker to aid in her mobility at home, but uses a wheelchair when she’s out in the community. With the assistance of Khira Hacker, Rognes walks in the pool as Emily Taylor watches. – Kelly Wassenberg/Albert Lea Tribune