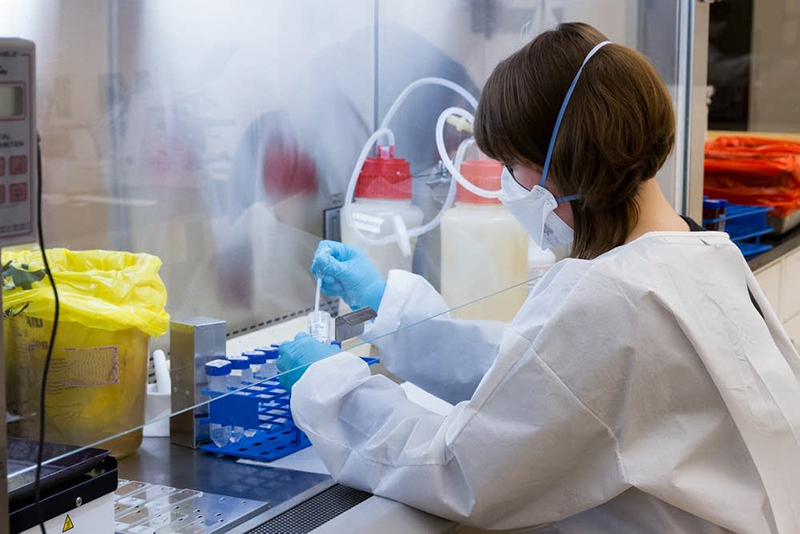 Lab scientist Rachelle Reneau works in the TB lab at the Minnesota Public Health Laboratory of the Minnesota Department of Health in 2014 in St. Paul. - Yi-Chin Lee/MPR News

Now, the outbreak is the largest of its kind in the nation, infecting 17 people across the state. All but a few of the cases involve Hmong individuals in the Twin Cities’ east metro. Six of the infected are now dead, and three of the deaths are attributed to the disease.

And as hundreds more are screened for exposure, public health officials don’t predict the outbreak will end anytime soon.

“We’ll be dealing with this for many more months and even several more years,” said Kris Ehresmann, director for infectious disease at the Minnesota Department of Health.

Tuberculosis spreads slowly. Unlike the state’s measles outbreak, which was contained within less than five months last year, the transmission of tuberculosis requires prolonged contact with people who are infected.

Tuberculosis is also tricky to detect. One person in the card-playing group had it for five years before it was diagnosed, said Anne Barry, director of St. Paul-Ramsey County Public Health. Nine others associated with the senior center then contracted it.

That scenario shows why Hmong community members and medical providers need to be on alert, Barry said.

“It would be easy to misdiagnose tuberculosis,” she said. “Now, providers are apt to look and suspect tuberculosis. The message is, ‘Think tuberculosis when you might not otherwise think it.’”

Still, officials said the public is not at risk. Although tuberculosis is contagious, it’s not easy to catch. The disease is spread through the air, through coughing, sneezing or talking, and is transmitted among people who see one other often.

The outbreak originated overseas. Some of the infected people hailed from a Thai refugee camp where tuberculosis infections were common. When they were resettled in Minnesota, they carried a latent form of the disease that was not infectious. But as they got older and their immune systems weakened, the disease became active, and they passed it along to others.

Fighting this strain of tuberculosis will require not only time, but money. The average cost of treating a patient with multi-drug resistant tuberculosis is $134,000, and it can go on for more than 18 months.

Symptoms of tuberculosis include a cough that lasts for three or more weeks, chest pains, coughing up blood, fatigue, night sweats, fever and chills.