Walter Russell Riggle of Glenville passed away Monday, Nov. 13, 2017, at Good Samaritan Society of Albert Lea. He was 81. 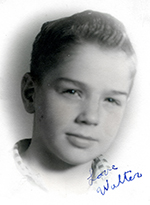 Walter was born Oct. 18, 1936, to parents Walter Ray and Martha (Bergland) Riggle in Crystal Lake, Iowa. He attended high school in Crystal Lake and served for three years in the National Guard. He moved to the Glenville area in 1963.

Walter was a very hard worker. In his younger years he was a farmer and enjoyed collecting old tractors. Later on he worked at Queen Stove Works in Albert Lea and drove truck for different companies.

Walter enjoyed spending time with his family and will be missed.

He was preceded in death by his parents and brother, Richard Helland.