Agnes M. Stahl, 95, of Albert Lea, formerly of Austin, died Sunday, Dec. 24, 2017, at St. John’s Lutheran Community in Albert Lea. Agnes Marie Bliss was born Oct. 1, 1922, in Osage, Iowa, the daughter of Clarence and Elda Bliss. She received her education in Missouri. On March 11, 1939, she was united in marriage to LaRoy William Stahl at Osage. The couple made their home in Austin, where they raised their family of five boys. Agnes was a member of Crane Chapel. She liked gardening, canning, embroidering and quilting. She kept busy with her five boys and would always bake fresh bread for them. In addition to raising her family, Agnes worked for many years at Land O’ Lakes in Albert Lea. LaRoy died on Feb. 9, 1991.  Agnes continued to make her home in Austin until moving to St. John’s Lutheran Community in 2014. 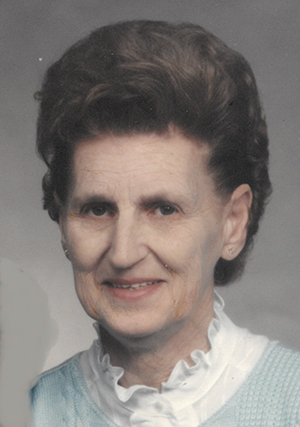 She was preceded in death by her parents, Clarence and Elda Bliss; her husband, LaRoy Stahl; and brother, Herb Bliss.