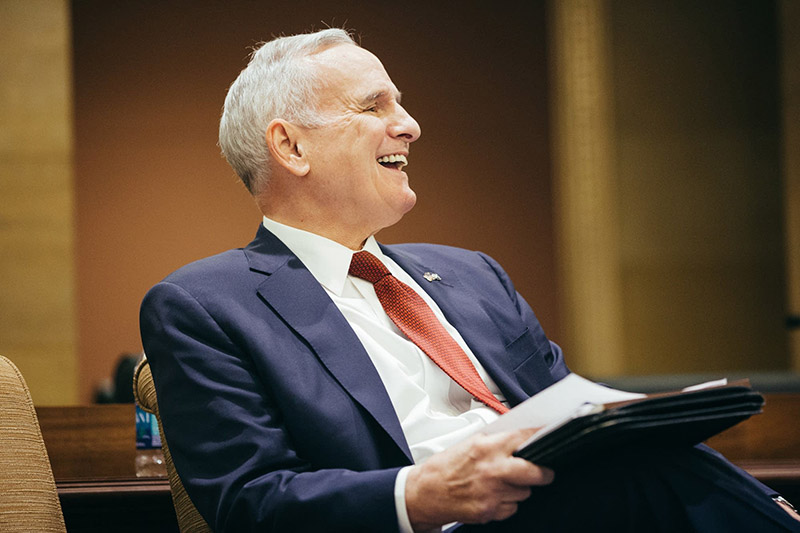 In this photo taken Jan. 24, Gov. Mark Dayton laughs at a remark from Comissioner Myron Frans before taking the podium inside the Minnesota State Capitol in St. Paul. Evan Frost/MPR News file

Gov. Mark Dayton declared himself cancer-free on Monday while urging Minnesotans to make time to get screened for cancer if they have risk factors or family history of the disease.

In proclaiming this “Cancer Screen Week” in Minnesota, Dayton credited his own early diagnosis with helping him beat cancer. Around this time last year, the 70-year-old Dayton was alerted through an annual physical exam to his likely prostate cancer. It was confirmed by a specialist and Dayton underwent surgery six weeks later.

“Fortunately, up until this point, I’m cancer free. And that early detection was just crucial,” he said, adding that it was caught before it could spread to other organs.

Dayton was surrounded by representatives of advocacy groups and survivors of breast, colon, prostate and other cancers in promoting the importance of screenings. They spoke of early detection improving outcomes and reducing suffering from advanced cancers.

Teacher Veronica Bong of Mora said she’s two years removed from her colon cancer. It was caught during a colonoscopy. Two of Bong’s adult children had pre-cancerous polyps removed after screenings of their own.

“Screenings save lives, including mine. One clear screening is not enough. Make sure you keep getting screening at the recommended times,” Bong said. “Colonoscopies are easier than cancer. I should know. I’ve had both.”

A big fear at the time was losing her hair during an election year.

“That didn’t happen,” she said.

“I keep catching myself thinking and saying, ‘I’m so lucky that it was detected early and my treatments were easy and my prognosis is good. I’m so lucky.’ But we all know that it is not luck. Luck is chance, an accident. This is no accident,” Kent said. “Deliberate early detection is key.”