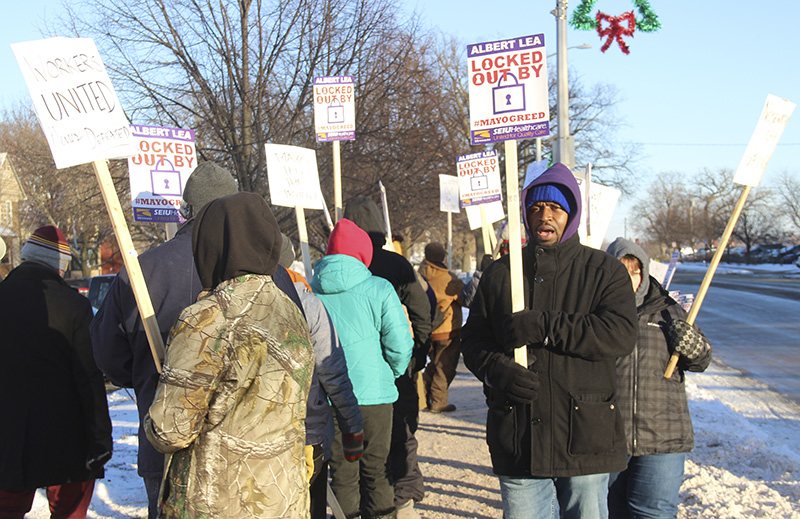 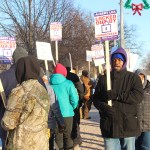 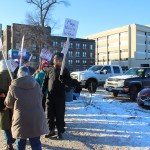 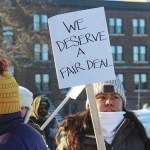 DFL candidates for state offices continued to criticize Mayo Clinic Health System Friday for not allowing workers who participated in a one-day strike Tuesday to return to work before Christmas.

The comments Friday by 1st District Congressman and candidate for governor Tim Walz and candidate for state auditor Jon Tollefson came on the fourth day workers represented by Service Employees International Union picketed on a public sidewalk outside the hospital.

“What’s best for the patient is to get this contract done and get these folks back to work,” Walz said. “And I think the idea of not allowing them back in over Christmas simply sends a message — especially in this community — that is really unacceptable.

At times, Walz marched with the picketers and stood near the street motioning at cars to signal their support for the workers.

During a speech to the Mayo employees, Walz said he was thankful workers decided to picket outside the hospital and cited his experience as a union member.

He expressed his displeasure with the recently-passed tax bill, especially because programs, such as protections for undocumented immigrants brought to the U.S. as children, the Children’s Health Insurance Program and Veterans’ Choice program have not been permanently funded.

The strike comes as conflict remains between SEIU and Mayo Clinic after the union objected to a clause that union benefits could change in accordance with a change in benefits for non-unionized employees.

“It’s not OK that you’ve been locked out over Christmas,” Tollefson said.

“I’m proud to be standing with you.”

Tollefson expressed disappointment the hospital system has cut services despite receiving tax breaks and said he supports taking tax breaks away if Mayo is “profit-motivated.”

In an email Friday, Mayo Clinic spokeswoman Ginger Plumbo took issue with statements made by prospective legislators in support of the workers.

“While it’s understandable to see emotions run high from union leaders, it is unfortunate to hear the same rhetoric from elected officials and candidates, and especially disappointing to see this one-sided approach from our own congressman,” she said.

“What we want Minnesotans to remember — and what we have told Congressman Walz — is that our primary focus is to reliably provide high-quality, uninterrupted care for our patients and their families.”

Plumbo said the union called the strike Tuesday despite knowing Mayo needed to hire replacement personnel for at least one week to provide uninterrupted care to the area.

“We are not locking any employees out,” she said. “The union leaders were all aware well in advance that their decision to have members walk off the job meant they would be out of work for seven days.

“We believe this was avoidable and unnecessary on the union’s part. No employee is losing any benefit, and the changes in coverage we are discussing are consistent with nearly all other Mayo Clinic employees, including the Minnesota Nurses Association.”

Plumbo said the hospital hopes SEIU “returns to the negotiating table and focuses their efforts on good-faith bargaining to reach an agreement.”

Workers planned to end the picket at 5 p.m. Friday to spend the weekend before Christmas with their families before returning to work Tuesday.

A bargaining session between the two sides is scheduled Thursday.

“We refused to let Mayo’s locking us all out on Christmas break our spirit,” longtime Albert Lea hospital housekeeper Heather Olson said in an SEIU press release. “I am so proud that our group is standing strong for what is right.

“We haven’t wavered one bit, and we are committed as ever to winning this fight for good jobs and good health care. It feels good that our union and community made sure everyone was taken care of, and we are going to stick together and continue our fight for what is right.”

Longtime Albert Lea hospital utilities department employee Justin Yost said in the press release he was “surprised” the hospital system said it would be pleased to negotiate with the union after announcing the workers would not be able to return to their positions for one week.

“We will see next week if their actions match their words,” he said. “The one thing we know is that all of us who were kicked to the curb by Mayo are stronger and more united than ever in fighting for good jobs and good health care.

“We don’t make $2.8 million per year like Mayo CEO (John Noseworthy), so our family’s futures are depending on it.”

In the press release, SEIU said the hospital’s decision to sign the one-week contract with replacement workers “was another instance of the misplaced values Mayo continues to show as they work to undermine good jobs and roll back the health care in rural Minnesota, all in the name of more profits and higher executive pay.”

Union members reportedly plan to deliver collected toys and food to children in need next week.

“This week has made clear that our community can and must stick together if we have a chance of winning the jobs and health care we deserve,” said longtime Albert Lea hospital utilities worker Dave Larson. “We want to give back just a little, and we will use the Christmas season as a chance to support our fellow Albert Lea residents by sharing with those less fortunate than we are.

“We hope Mayo uses this holiday season to look in the mirror and decide if in 2018 they want to continue be the kind of place that locks out hard-working employees, or if they want to be an employer that listens and meets people in the community halfway.”