‘We are going to be here as long as it takes’ 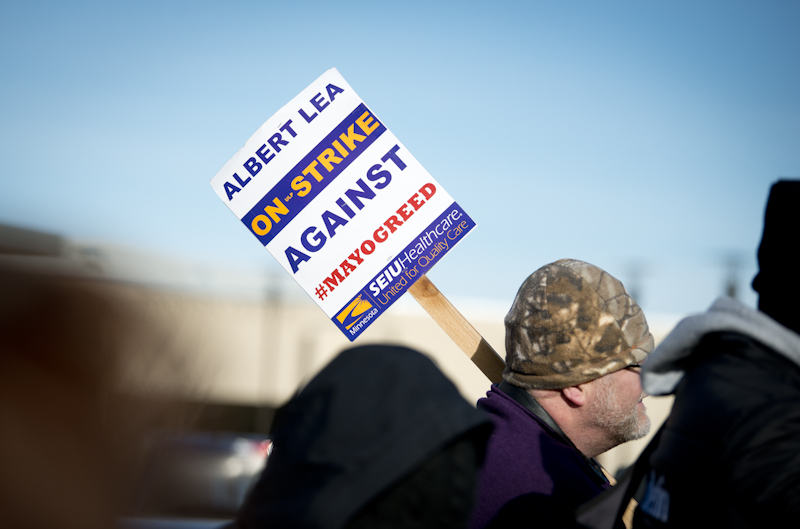 Hospital workers at Mayo Clinic Health System in Albert Lea walked off the job on a one-day Unfair Labor Practice strike at 6 a.m. Tuesday and spent the rest of the day picketing and rallying in front of the hospital. - Colleen Harrison/Albert Lea Tribune

Dozens of Mayo Clinic Health System in Albert Lea employees on strike and their supporters picketed Tuesday on a public sidewalk in front of the Albert Lea hospital.

Marchers chanted slogans supporting the approach of employees to a new multi-year contract with the hospital system and deriding Mayo Clinic Health System for its approach to rural health care with phrases such as, “When Mayo workers are under attack, what do we do? Fight back,” “What do we want? Contract! When do we want it? Now,” and “Hey, hey, ho, ho, Mayo’s greed has got to go.”

“They want to take all the language out that we’ve had since I worked here about health care, PTO, all kinds of stuff, and they want to have language in there about subcontracting,” he said. “So, we feel just like for small Albert Lea, that would be a devastating thing to have worse jobs if we ever subcontracted.”

The strike comes as conflict remains between SEIU and Mayo Clinic after the union objected to a clause that union benefits could change in accordance with a change in benefits for non-unionized employees.

Henry Tews, a plumber and maintenance worker at the hospital, said he was glad state politicians attended the event.

It has been more than two years since maintenance workers at the hospital had a contract, Tews said, noting the union rejected attempts by the hospital system to add language that would allow Mayo Clinic Health System to subcontract services.

“You hear that over there?” said Bobby Kasper of the AFL-CIO union, directly facing the hospital building. “We are going to be here as long as it takes.”

“What Mayo is doing is wrong,” he said.

Thissen discussed his willingness to re-write language regarding the Destination Medical Center project during next year’s legislative session until the hospital system changes its approach.

Mayo Clinic spokeswoman Ginger Plumbo said Monday more than a dozen workers were choosing not to strike but were under “huge pressure” to.

She said the SEIU was being “very heavy handed,” and said workers on strike will continue to receive benefits.

Mayo Clinic values its employees and wants all employees to have the same benefits, Plumbo said, who described the hospital’s benefits package as one of the best in the state.

Liebling, D-Rochester, said during the program that she attended the event to support employees receiving fair wages. 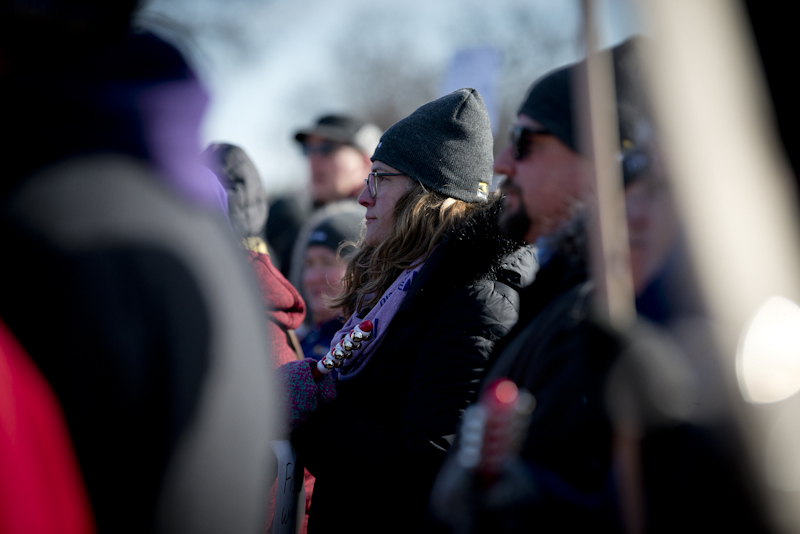 Though Mayo Clinic does a lot of good work, the hospital has recently operated with an increased emphasis on making money, Liebling said.

Mary Turner, president of the Minnesota Nurses Association, decried the hospital system’s plan to transition most inpatient services to Austin and took issue with Mayo’s approach to bargaining with SEIU workers.

“This smacks of corporate dictatorship, and we can’t stand for that,” she said.

“You will stay strong, and the nurses will stand with you.”

“I’m with you in solidarity,” Murphy said.

SEIU President Jamie Gulley said during the program that the hospital system wants to take away bargaining rights from the organization.

The strike began early Tuesday and was expected to last until 6 p.m.

Workers were expected to try to return to work early Wednesday, but the hospital system stated most striking employees will not be able to come back until next week because of a minimum one-week contract Mayo must sign with temporary employees.

Workers planned to continue to picket if they could not return to work.

After the meeting, Gov. Mark Dayton and Lt. Gov. Tina Smith urged the two sides to come to an agreement.

“I deplore this extremely unfortunate situation,” Dayton said “I urge both sides to resolve their differences immediately, for the sake of the workers, the patients and the hospital’s standing in the community.”

“For the sake of workers and their families, negotiations should resume immediately to resolve this unfortunate situation,” Smith said. “Locking out workers who are trying to provide for their families and celebrate the holidays with their children is simply unacceptable.

“This approach is not in the best interest of their patients, workers or the Albert Lea community.”

Six maintenance employees are expected to be able to return once the strike is over because in-house employees will temporarily handle their duties. 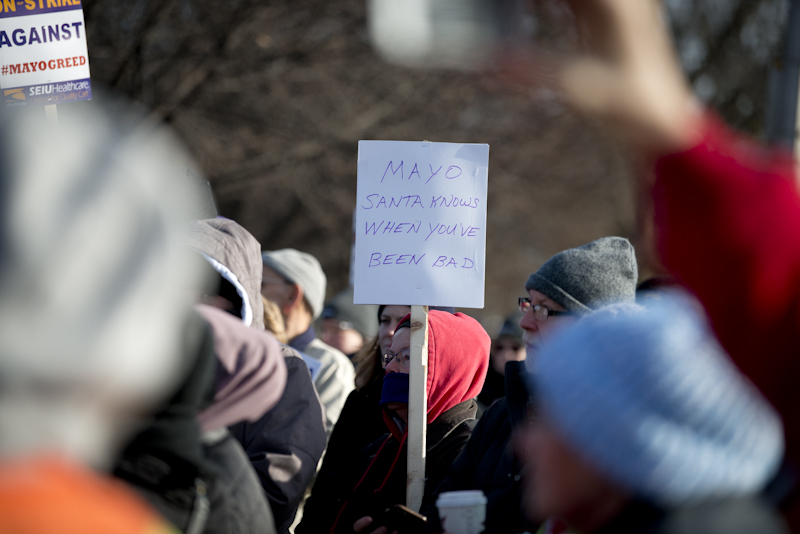 A sign reading “Mayo Santa knows when you’ve been bad” is held up during a rally Tuesday in front of Mayo Clinic Health System in Albert Lea. – Colleen Harrison/Albert Lea Tribune

On Monday, the hospital system stated SEIU filed several unfair labor practice charges with the National Labor Relations Board to try to influence the bargaining process, noting the NLRB Division of Judges ruled Sept. 21 that Mayo had complied with the law and negotiated in good faith with the union.

Kris Johnson, associate administrator for Mayo Clinic Health System in Albert Lea, expressed disappointment Monday that the strike is taking place less than a week before Christmas, adding SEIU had not asked for a bargaining session between May and a recent date.

SEIU vice president for its southeast region Mindy Tomfohrde had a sign that stated “Scrooged by Mayo” at the march.

“Mayo has decided that they weren’t going to honor benefits,” Tomfohrde said. “They’re not honoring PTOs — they just don’t don’t sit down at the table and negotiate with our members here.

“And then taking away the hospital and jeopardizing the people here with their jobs — it’s just not a good deal.”

An Olmsted Medical Center employee, Tomfohrde said she feels a connection with local employees on strike.

“These are my brothers and sisters on the lines,” she said.