Finding furry friends a home for the holidays 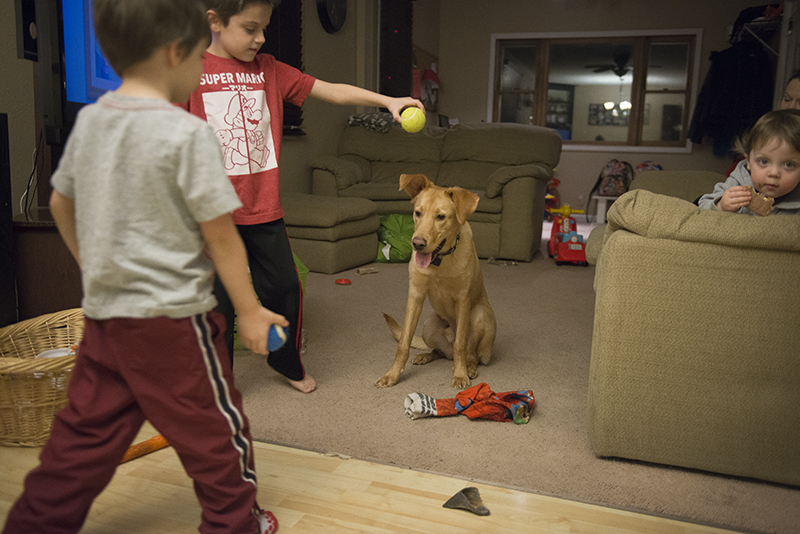 Davy Villarreal and Krystal Paulson and their family adopted Woody from the Humane Society of Freeborn County in June. - Colleen Harrison/Albert Lea Tribune

Time and patience go into finding the right shelter pet

When looking for the right pet for a family, the process takes time, whether those pets are from a breeder, a pet store or an animal shelter. Which means, gifting a pet to someone else for the holidays isn’t always the best idea.

At the Humane Society of Freeborn County, plenty of animals are available for adoption, but only after an adoption application has been vetted and approved. During the shelter’s “Home for the Holidays” adoption drive, adoptions fees are lower than normal in hopes of finding homes for animals in the overcrowded building. The Humane Society has had the holiday adoption drive for years, with prices varying from year to year depending on how crowded the shelter is at the time. This year, for example, the shelter has been “overloaded” with cats, according to Humane Society Director Christa DeBoer, and so adoption fees for cats and kittens are especially lower than usual.

DeBoer said while the nonprofit wants people to adopt animals, it also works to make sure the right animal is going home with the right family, and that people understand the commitment they’re taking on when adopting an animal. When bringing a new pet into any home, there will always be an adjustment period, when time and patience are needed for all involved, she said. Animals living in the shelter get accustomed to a different lifestyle than what they’d typically experience once adopted, so understanding is needed when animals are introduced to something or someplace new. All too often, animals are brought back to the shelter due to problems stemming from not having enough time to adjust to their new home, DeBoer said. 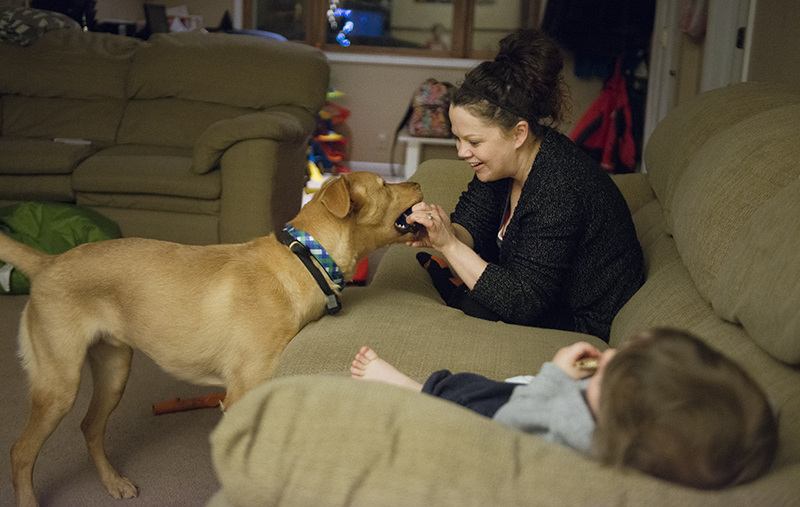 Another point she stressed is that gifting a pet for a holiday or other special occasion doesn’t always work out.

“Animals do not always make the best presents for unsuspecting people,” she said.

When people look to adopt an animal for someone else other than themselves from the shelter, DeBoer said they’re told to fill out an application in the name of the person who will eventually be caring for the animal. She said that person should also be involved in meeting the animal and seeing if they’re the best fit.

She pointed out that adopting a shelter animal can save people money, as they are up-to-date on age-appropriate veterinary procedures and vaccinations, which is not usually the case for animals purchased from a breeder or pet store.

“I think people feel good about it, too,” she said. “They rescued an animal.”

For Davy Villarreal and Krystal Paulson, they knew they wanted to adopt from the Humane Society when they were considering getting a dog.

“We wanted to be able to help out a dog that needed it,” Villarreal said.

One day over the summer, Paulson happened to see a photo of a puppy that reminded her of a golden retriever — one of her favorites — and the couple looked into the dog’s story. They found out the puppy, named Woody, was around 8 weeks old at the time, and the rest of his littermates as well as his mother had died due to distemper — a contagious and serious viral illness with no known cure in canines. Woody had somehow survived, but due to what was listed as a “head wobble” was labeled as a special needs dog. 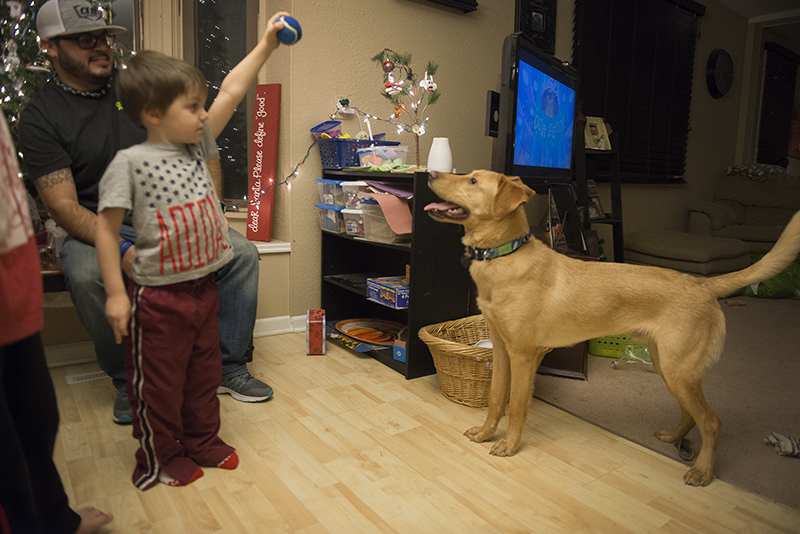 Davy Villarreal and Krystal Paulson and their family adopted Woody from the Humane Society of Freeborn County in June. – Colleen Harrison/Albert Lea Tribune

After going through the application process, the couple asked if they could bring Woody home for a few days to see how he’d do with their schedules and their three boys — Beckett, almost 2; Tyson, almost 5; and Trey, 9 — as well as the family’s two cats. Villarreal likened Woody being in the house to having another baby — lots of crying and waking up at different times of the night.

“It’s easily comparable to having a newborn baby,” he said. “We thought we were done with those days.”

Even so, the family knew they liked Woody right away, and decided they could make it work. They haven’t looked back since.

It probably didn’t hurt that he fell asleep wrapped around Villarreal one of his first nights in the home.

“We could tell he was comfortable right away,” he said.

“We knew that’s what we wanted. He was ours.”

The family didn’t bother changing Woody’s name when they adopted him, as the “Toy Story” movies are a family favorite.

Woody’s manners have gotten better with training and routine over time, but he is still a puppy — he’s now around 8 months old. The head wobble initially manifested similar to a Parkinson’s disease tremor, Paulson said, but has gone away over time.

The dog has developed a sense of protectiveness for Beckett, the family’s youngest. Paulson and Villarreal said Woody will sleep next to Beckett when he takes a nap, and if the family’s roughhousing or playing he’ll usually keep an eye on the toddler.

While he wasn’t especially touchy-feely when he first came home, Woody now likes to cuddle with his family on the couch — sometimes just sitting on top of them all together.

He loves playing with his boys, and in turn they’re starting to learn responsibility by helping to take care of him, Paulson and Villarreal said.

“When we get home, they fight over who gets to let him out of the kennel,” Paulson said.

“They wear each other out,” Villarreal added. “He’s part of the family.” 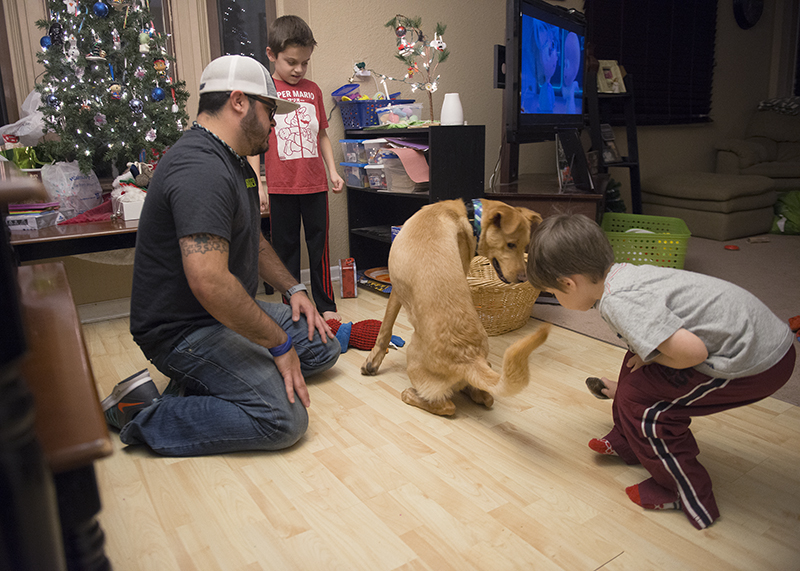 The couple said Woody has been a perfect match for their three young boys. “They wear each other out,” Davy Villarreal said. – Colleen Harrison/Albert Lea Tribune