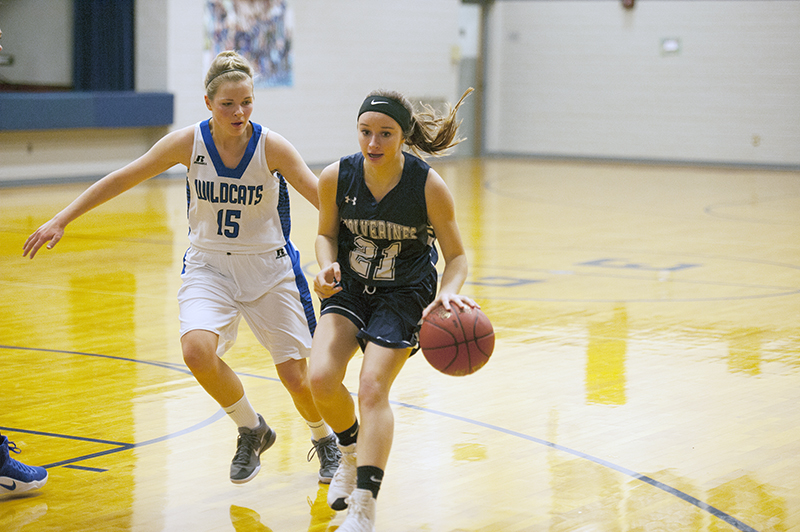 Glenville-Emmons sophomore Kennedy Severtson dribbles the ball away from trouble in Monday night's loss to Heron Lake-Okabena. She would finish with five points in the game. - Tyler Julson/Albert Lea Tribune

In a game that came down to the wire, the Wolverines fell in a heartbreaker to the Wildcats, 42-41.

Both the Wolverines and Wildcats remained even with each other throughout the entire first half. The biggest deficit saw the Wolverines down by five after two quick baskets and a steal from the Wildcats.

The Wolverines battled back to take a lead of their own after baskets from sophomores Sydney Rasmussen and Sara Allison.

It was a low-scoring matchup for the majority of the opening half, but the Wolverines were able to head to halftime with an 18-16 lead over the Wildcats.

“We’ve gotten a lot better at ball handling and kicking the ball back out to the perimeter for open shots,” said head coach Lucas Knutson. “It was a low- scoring game for awhile, but I think they played a great 36 minutes of basketball.”

The second half started much the same way as the first half did, with both teams trading baskets on their first few possessions.

The teams traded the lead back-and-forth multiple times over the course of the half. With neither team able to score the pull away basket down the stretch, the game went into the final minute a tie game.

The Wildcats capitalized on a missed free throw by the Wolverines and scored the go-ahead basket with 15 seconds remaining. With no timeouts left, the Wolverines ran the ball down the court and got an open look at the basket, but the shot would miss the target and the Wolverines would lose by one.

“I told them it should hurt a little bit,” Knutson said. “We haven’t been in a game like this since I’ve been here and hopefully they learn and get better from it.”

The Wolverines were lead in scoring by Rasmussen with 10. Savanah Schipper and Chloe Anderson each had six, and Allison and Kennedy Severtson had four.

Glenville-Emmons falls to 1-2 on the season and will be back in action on Monday when they host Cleveland.