Funeral mass for Harriet Menke will be celebrated at 10:30 a.m. Friday at St. John’s Catholic Church in Bancroft. Visitation will be from 4 to 7 p.m. today at Oakcrest Funeral Services in Bancroft.

Harriet Corina Menke was born Dec. 23, 1917, in Albert Lea, the daughter of Bernhard and Clara (Stadheim) Johnsrud. She grew up and attended school in Albert Lea, graduating from the Albert Lea High School in 1935. After her schooling, she worked as a telephone operator. 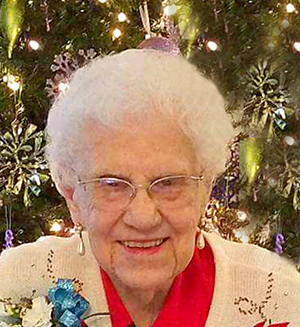 On Aug. 14, 1943, Harriet was united in marriage to John Menke in Dotham, Alabama. Upon his honorable discharge from the military, they returned to the Bancroft area and began farming. They farmed until retiring in 1982, when they built a home and moved into Bancroft.

Harriet enjoyed crafting, bowling, playing golf and traveling with John. She was a member of the St. John’s Parish, altar society and the Veterans of Foreign Wars Auxiliary.

She is survived by her sisters, Cora Arnold of Owatonna, Janet and her husband, Herman Stenga, of Soldotna, Arkansas, and Barbara Schultz and her husband, Ron Verdoorn, of Victoria; John’s sister, Janet Winkel Muller, of Whittemore; and numerous nieces, nephews, great-nieces and great-nephews.

Preceding her in death were her parents; husband, John, on Jan. 3, 2012; sisters Edith Schulenberg, Lila Glantz and Dorothy Magelssen; and brother, Bendy Johnsrud.

Condolences may be left at www.oakcrestfuneralservices.com.