An Iowa woman was arrested early Saturday morning after leading authorities on a high-speed chase in Freeborn and Faribault counties. 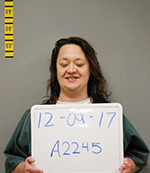 According to the Freeborn County Sheriff’s Office, a deputy attempted to stop Sims in a 2003 Pontiac Grand Am at 1 a.m. Saturday near the intersection of State Line Road and U.S. Highway 69 in Emmons.

The car did not stop and accelerated, continuing west on State Line Road. The car reportedly failed to stop for a stop sign and continued into Faribault County on County Road 50 and then north on Highway 22. The pursuit went through Kiester and then the car hit two sets of stop sticks that officers had deployed on Highway 22 south of County Road 46.

After three of four vehicle tires deflated, the car came to a stop, and Sims was arrested.

The Sheriff’s Office stated speeds reached as high as 90 mph during the pursuit.