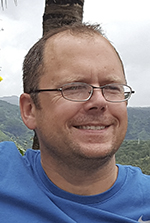 Jason Christopher Kraft was born Sept. 19, 1972, to parents Joe and Ann (Johnson) Kraft in Milwaukee. He graduated from Kettle Moraine High School in Wales, Wisconsin, and received his bachelor’s degree from the University of Wisconsin-La Crosse. Jason moved to Milwaukee in 1996, working with his father to establish a tool and die career.

In 1997, Jason married Amber Oothoudt at First Presbyterian Church in Albert Lea. In 2002, Jason and Amber moved to her hometown of Albert Lea. They were married for 17 years and raised two children.

Jason became skilled in design and engineering and began working for Dras Cases in Lake Mills in the spring of 2008. He was also a gifted woodworker and craftsman. He loved reading, rooting for the Packers, relaxing with Alix, his Brittany Spaniel — and, most importantly, spending time with his kids. Jason was a devoted and loving father who coached athletic and academic activities his children took part in.