Memorial services for Jean Ann Mattingly of Albert Lea will be at 2 p.m. Wednesday at the Bonnerup Funeral Service chapel in Albert Lea. The Rev. Don Malinsky will officiate. Visitation will be one hour prior to the service. Interment will be in Graceland Cemetery. 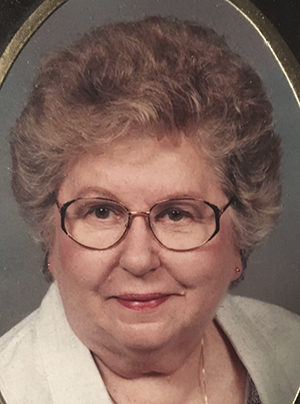 Jean was born July 13, 1930, in Albert Lea, the daughter of Richard and Martha (Everson) Parry. She graduated from Albert Lea High School in 1948 and was united in marriage to DeVern Mattingly on Sept. 7, 1952, in Albert Lea.

Jean was an active member of United Methodist Church and had been employed at Halverson and Ramsey schools in Albert Lea in food service and as a media clerk in the library before retiring. She enjoyed reading, sewing and working with the children in the public schools. The best times were spent with her family and grandchildren.

Numerous descendants, living and deceased, lived in and are from England and Wales.

Jean was preceded in death by her parents and husband.