Jon Harlan was born March 11, 1975, in Morrisville, Pennsylvania, to Gary and Diana (Gilbert) Carlson. At a young age, Jon’s family moved to the Blooming Prairie area, where he attended elementary school and graduated from Blooming Prairie High School with the class of 1993.  After high school, Jon worked in the construction industry. 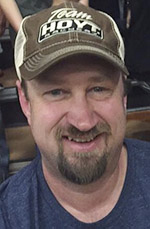 In 1997, he started Jon Carlson Construction. In 2006, Jon began working for RWP Design Build in Geneva. In 2013, Jon and his business partner Tait Ingvaldson purchased RWP and renamed it Geneva Lumber Company. Jon was very proud of his business and was a perfectionist when it came to his trade. However, at the center of his life was his family. Jon was a devoted husband and father, and his wife and kids meant the world to him.

He was united in marriage to Angela Mae Jones on Sept. 20, 2008. Jon was Angie’s best friend, comforter, comedic audience, her soul, her everything.  He was very active in his kid’s lives, whether he was coaching their 4-H softball teams, watching the kid’s sporting events or going on family camping trips.

Jon served as past president of the Matmen Wrestling Organization in Blooming Prairie. He also had a very close relationship with his nieces and nephews. Jon was an avid hunter and fisherman, and always looked forward to deer camp and his annual fishing trip with family to Canada.

He was a member of First Lutheran Church in Blooming Prairie, where he had served as past president of the youth board. Jon was able to give the gift of life through organ donation.

He was preceded in death by his grandparents Harlan and Mary Carlson and Arthur and Annabelle Gilbert, and his uncle, David Carlson.

Worlein Blooming Prairie Funeral Home is assisting the family, and condolences may be expressed to the family online at www.worlein.com.