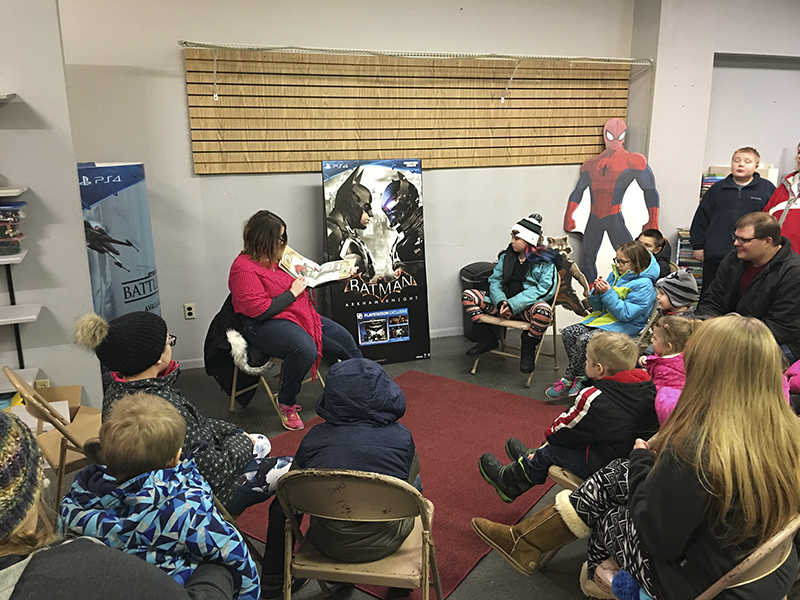 The Chapel Comics & Collectibles Shop received a bigger turnout than its owner was expecting in mid-December when it offered its first in a series of events aimed at children and families.

Gilbert Johnson Jr., who owns Chapel Comics & Collectibles, estimated there were 30 children in attendance Dec. 14, when volunteer Olivia Garcia read three books for the audience. He said this is the start of something he hopes will carry on.

“I want to continue it until the end,” Johnson said.

Johnson said he has always wanted to hold kids events, but until he purchased more space, he didn’t have the room. Space was his biggest challenge. Now, that has changed. As of October, he owns the building next door.

So far, he has events scheduled through July. Johnson hopes to offer an event at 7 p.m. every other Thursday. The next is Thursday and one of the ones Johnson is most excited for: a Batman-themed painting night. He has planned a Lego-building night and a family game night. In February, he has a volunteer planning a craft night where children will make valentine foxes.

“All of these are my ideas at first, but people have been adding others,” Johnson said. Volunteers, like Garcia and the one making valentine foxes, are what makes the world go round for these events and help him make the schedule workable.

“My time is so limited that I need to be able to pass the work if I can get somebody that is able to do that,” Johnson said.

Garcia said she agreed to read at the first event during a tattoo appointment with Johnson.

Garcia participated in storytelling events in speech and drama during high school. She spent three months brushing up on character voices to read Jan Brett’s “The Hat” at the December event.

Garcia said the event was received well by the audience, which ranged from babies to 12 to 13 years.

“They all told Gilbert when they were leaving that they had a really great time and couldn’t wait to come back,” she said.

Johnson’s goal for the programs was to fill what he saw as a gap in community programming for children.

“We have a lot of programs that happen for kids, but they always happen … at a time when families can’t attend them together,” Johnson said. Something in the p.m. allows children to attend with their guardians.

Johnson’s “no phones” rule allows them to enjoy it together, he said.

“It’s about family being together and spending time with family,” he said.

He said he also tries to keep the programs free, and for the events that do have a cost, there is a scholarship available for children who can’t pay the participation fee.

“There’s always the challenge of getting people to actually come, because a lot of people think all of these things cost so much money,” Johnson said. “And that’s been a big deal to me, is to make sure that this is low cost so anybody can come.”

As it continues, Johnson is hoping to offer more events, and not just for children. But for now, this is where he started, and it’s where his focus is.

“That’s kind of where I like to have things,” Johnson said of the events’ focus on children. “They’re our future, the future of comic books and toys.”

Who: Families and kids

How much: $5 per child to cover the cost of canvases. Sign up ahead of time. There is a scholarship available for families who need it. To inquire about the scholarship, contact Gilbert Johnson Jr. at (507) 369-3712