Mary Ann Blumer, 84, passed away peacefully Sunday, Nov. 26, 2017, at her home in Albert Lea. A memorial service will be at 2 p.m. Dec. 17 at First Presbyterian Church in Albert Lea. The Rev. Dwight Netzer will officiate. Visitation will be one hour prior to the service. Interment will be in Lakewood Cemetery in Albert Lea at a later date. Bonnerup Funeral Service is handling the arrangements. 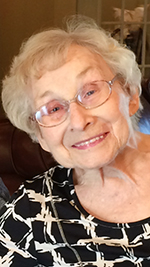 Mary Ann Blumer (Redmond) was born March 30, 1933, in New Brighton, Pennsylvania. She was raised in Chippewa Township, a suburb of Beaver Falls, Pennsylvania, by her mother, Betty Simon Redmond, and beloved adoptive father, Clyde Redmond. Mary Ann attended Chippewa Elementary School through eighth grade and graduated from Beaver Falls High School. She then graduated from Providence Hospital School of Nursing as a registered nurse. At her nursing position at Butka Medical Center in Alhambra, California, Mary Ann met her future husband, Arlo Blumer. They were married March 3, 1956. Arlo had been drafted into the U.S. Army and the young couple was stationed at a communications base near Asmara, Eritrea. There they welcomed their first of six children. Upon returning to the States, Arlo and Mary Ann chose Albert Lea to establish Arlo’s medical practice and raise their family.

Mary Ann was a member of the medical auxiliary and hospital auxiliary, held the office of president of PEO Chapter BK and several other offices, and was proudly celebrating her 48th year of membership. She was an active member of First Presbyterian Church, at which she served as an elder and visiting deacon. She was an Albert Lea Art Center volunteer, co-chairwoman of the Vision and Hearing Screening Clinic for 4-year-olds and co-chairwoman in starting rheumatoid arthritis self-help classes.

Mary Ann and Arlo enjoyed dancing, especially with the Star Dusters Dance Club; attending Civic Music concerts and Albert Lea Community Theater productions; and traveling with their children on summer vacations — touching all 48 contiguous states and Canada over the years. When their children were grown, Arlo and Mary Ann spent 22 winters in Pharr, Texas. They also traveled a great deal both in the United States and abroad with family and cherished friends, making many wonderful memories.