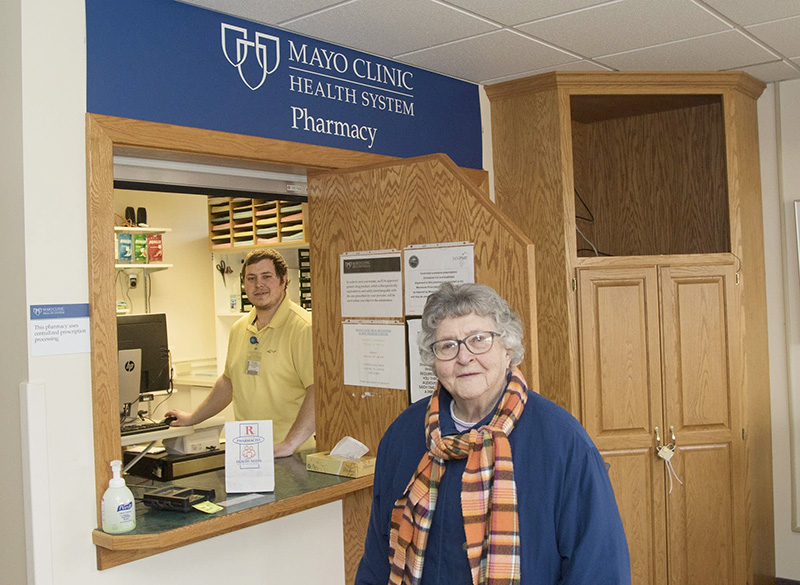 Eileen Evans has been a lifelong supporter of Mayo Clinic's small branch office in LeRoy. While very disappointed that the clinic has been closed, Evans is grateful that the related pharmacy remains open — at least for now. Mayo technician Cassidy Milks works behind the counter. Jerry Olson for MPR News

LEROY — This tiny southeast Minnesota town doesn’t have even 1,000 people living in it. But it did have a Mayo Clinic until this fall.

Mayo announced this summer that it would close its LeRoy clinic after key staffers left, though its pharmacy remains open.

That has people like Eileen Evans worried, wondering where they’ll get basic care. The 86-year-old said her closest option is 20 minutes away, a long drive for her.

“I felt very, very lost. And I still feel lost,” she said.

This scenario is playing out in towns across the state as Mayo closes or trims service at smaller clinics throughout its Minnesota health care network, leaving some Mayo patients concerned about getting to a doctor and questioning the clinic’s commitment to the people in its service area.

“They threw us to the wind. That’s what they did,” Evans said.

Twenty-five years ago, Mayo brought its expertise to clinics and hospitals in rural areas of southeast Minnesota, Wisconsin and Iowa. Now, Mayo is shrinking its footprint in some areas.

The LeRoy shutdown is one of at least four closures or consolidations this year. Mayo said it has closed 10 facilities since 2009 — usually clinics that don’t see many patients or that are near other facilities.

“Those are just natural ebbs and flows of business,” said Doug Parks, the top administrator of Mayo Clinic’s satellite system in southeast Minnesota. He said visits to outpatient clinics like LeRoy’s produce less revenue than hospital stays, so these facilities have tighter finances.

Plus, staffing clinics in LeRoy or any rural community is difficult.

“We try to make good decisions with limited resources,” he said.

But even when staff are available, Parks said Mayo has to make a choice: put those employees in a small clinic, or in a busier part of the network where there’s high demand for services.

While LeRoy residents look for new options, people in Kiester worry they’ll be next.

Kiester Mayor Doug Trytten thanks Mayo’s outpost on the main drag of this tiny, rural and aging town for being the first to catch his cancer.

“They’re my angels, that’s for sure,” Trytten said, adding the Mayo brand has been a point of pride for the town.

“I was traveling for a large corporation, and I’d tell everyone that I come from a town of 500-600, and we have Mayo Clinic in town. So it was pretty cool,” he said.

But now, the mayor said, he has soured on the organization. Over the summer, Mayo officials came for a visit and explained that staffing shortages could be a problem in Kiester. They made no mention of closing, but Trytten is still concerned.

Trytten said Mayo’s ambition to grow in Rochester and globally appears to outweigh the mission of helping people in small towns like his.

“They’re starting to run it more like a large corporation — which they are — but without the feelings and the understanding of how their business decisions are going to affect small-town living.” Trytten said.

But Mayo needs to watch its margins, said Moody’s analyst Dan Steingart, who tracks the company’s financial margins closely. “No margin, no mission,” he said.

Steingart said Mayo’s revenue has grown faster than its costs recently, showing the company is making sound financial choices — including the decisions on satellite facilities.

“They have been concentrating on improving performance at the collection of community hospitals that they have, and I think they’re seeing some of the fruits of those efforts,” he said.

Mayo administrator Parks said the company is not merely retrenching. It’s investing in some places, including building a new hospital in Cannon Falls, a $4 million expansion in Faribault and a scheduled upgrade in LaCrosse, Wisconsin.

He said all patients will benefit from Mayo’s $1.5 billion electronic medical records system and more than $1 billion in investments in Rochester’s Destination Medical Center.

“I think people think DMC is sucking things away from their communities when the strategy is completely opposite,” Parks said. “We’re trying to build infrastructure to keep care local. My personal opinion is that DMC will rise all ships.”