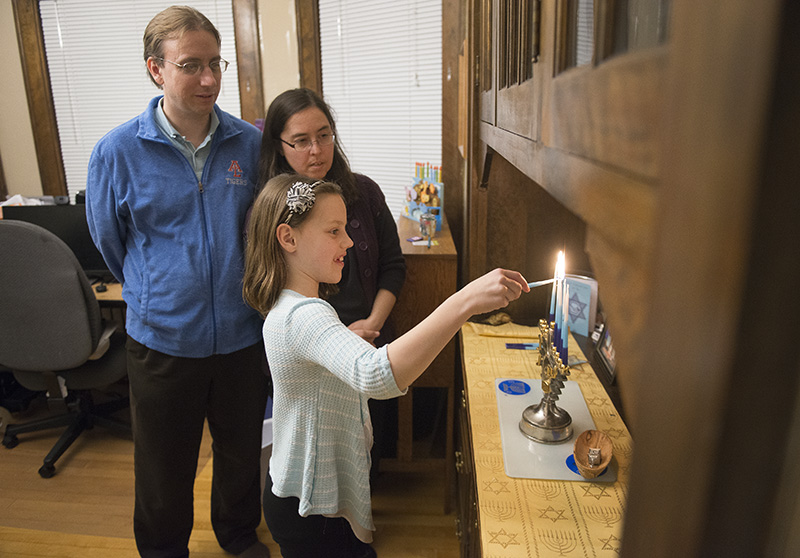 Compared to the menorah it is holding, the dinosaur on the cover of Anais Israel Nechanicky’s picture book is colossal.

Some of the stack of picture books are ones her mother, Taryn Israel Nechanicky, got from the public library when they were being decommissioned from use. But this book, “How do Dinosaurs Say Happy Chanukah?” is one Anais Israel Nechanicky gets through a program that supplies Jewish children one free book a month until the age of 8.

“We’ve learned so much about our own traditions this way,” Taryn Israel Nechanicky said. 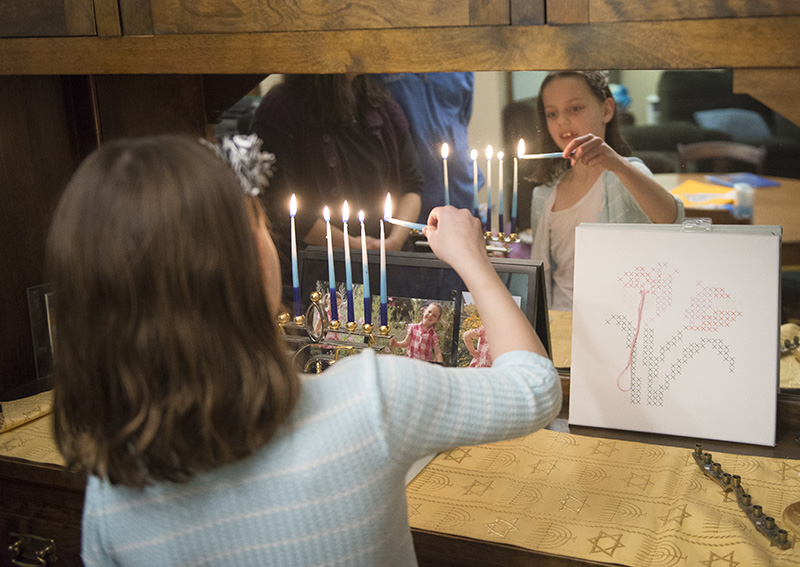 Several of the books refer to Hanukkah, which starts this year on Tuesday. That’s the Gregorian calendar. The Jewish calendar is lunar, and according to that calendar, Hanukkah is consistent: it starts on the 25th of Kislev.

“I have to keep looking for every holiday for every year,” Taryn Israel Nechanicky said.

In Judaism, the holiday celebrations begin at sundown the night before. This is when the Nechanicky family will light their menorah.

The candles on the Nechanicky menorah are tall and thin. As they melt, they’ll transition through white, sky blue and finally navy as they burn down from wick to base. Taryn Israel Nechanicky said this is the intention: for the candles to be lit at sundown, and to burn themselves out rather than be blown out.

According to Taryn Israel Nechanicky, this is one of the challenges of Hanukkah in modern life: timing.

They take their time to burn out.

She and her family are not orthodox Jews, so she said they are a little more lax about when the candles are lit. But part of the holiday by nature is that it is centered around the home.

“It’s a home holiday,” Taryn Israel Nechanicky said. “It’s not a synagogue holiday. … You just light the candles in the evening and have a meal together.”

According to Taryn  Israel Nechanicky, Hanukkah is not a major Jewish holiday. It’s not in the Bible, but rather mentioned in an ancillary, or secondary, text. It does not have the significance of holidays like Rosh Hashanah, Yom Kippur or Passover. But she said this is when most of the conversations about the traditions of Judaism come up with more frequency with her daughter and within society as a whole because of its proximity to Christmas.

Taryn Israel Nechanicky said both she and her husband feel grounded in what they grew up with, and that has come out in the way they raise their daughter.

“We just wanted our daughter to be aware of both,” Taryn Israel Nechanicky said.

“The elf doesn’t come to our house,” Taryn Israel Nechanicky said she tells children when they ask.

But Anais Israel Nechanicky knows there is something she isn’t supposed to share with her classmates.

“She knows, ‘You are not allowed to tell anybody that Santa’s not real, because they think he’s real,” Taryn Israel Nechanicky said. “You can’t ruin that. … We’re not lying to her, but she knows she’s in trouble if she tells.”

A season of light

At the holiday time, the Nechanicky household does not put up a Christmas tree, but they do acknowledge the holiday.

“We help each other celebrate,” Taryn Israel Nechanicky said.

These traditions are part of a bigger trend.

“There’s a lot of holidays about light this time of year,” she said. There’s Christmas and Hanukkah, but there’s also Diwali and Kwanzaa.

Taryn Israel Nechanicky said Hanukkah means “dedication.” It refers to a Talmudic story in which a small group of Jews went to rededicate the Jewish temple that had been desecrated by a group they had been fighting for freedom to practice their religion. In the Jewish temple, there is a lamp called the Ner Tamid, the eternal light. When the temple was being rededicated, there was only enough oil for the light to burn one day. It burned for eight.

“The mitzvah, the good deed, is to put your menorah in the window publically,” Taryn Israel Nechanicky said. “… We’re going to be the only one who has that in Albert Lea, and that’s fine.”

However, she said, she can feel some hesitation there.

“If you think about our history, that’s a big risk, too,” she said. It’s a history she said is embedded in the DNA. But Taryn Israel Nechanicky said she has only encountered curiosity among residents in Albert Lea.

Anais Israel Nechanicky’s third-grade teacher asked her to speak to the class about Rosh Hashanah and what it was like learning Hebrew.

Mark Nechanicky said his parents and Taryn Israel Nechanicky’s parents have a lot of value overlaps, which makes it easier for them to celebrate both religions. It also provides a chance to see something he knows in a different light.

“I think you get a new perspective on your own traditions,” Mark Nechanicky said.

For him, the similarities are evident.

“The common ground, the common conversation of both families are how to keep the tradition more family-centered,” Mark Nechanicky said. “And, I mean, I talk to her mom on the phone and she’s trying to figure out how to reduce down the Hanukkah gifts from grandma.”

His wife might have the same conversation with his mom about Christmas gifts.

Additionally, in both traditions it’s not uncommon to find people who feel isolated this time of year, Mark Nechanicky said. Even though it is a home holiday, the synagogue they attend has a service at Hanukkah to gather in those who may not have people to celebrate with.

The closest synagogue to Albert Lea is in Rochester, she said. Services are traditionally on Fridays and Saturdays. Friday evening services can be a challenge for the family to attend because it is easy to run past their daughter’s bedtime on a trip out and back.

For Taryn Israel Nechanicky, the miracle is less about the light. Instead, it’s keeping a 2,000-year-old religion alive. But there’s a little more, too.

Several of Taryn Israel Nechanicky’s old library books have a name in the front: the name of a former community member who is Jewish and an important member of the local Jewish community a few decades ago: Charles Upin.

It’s also about keeping that tradition alive within her community.