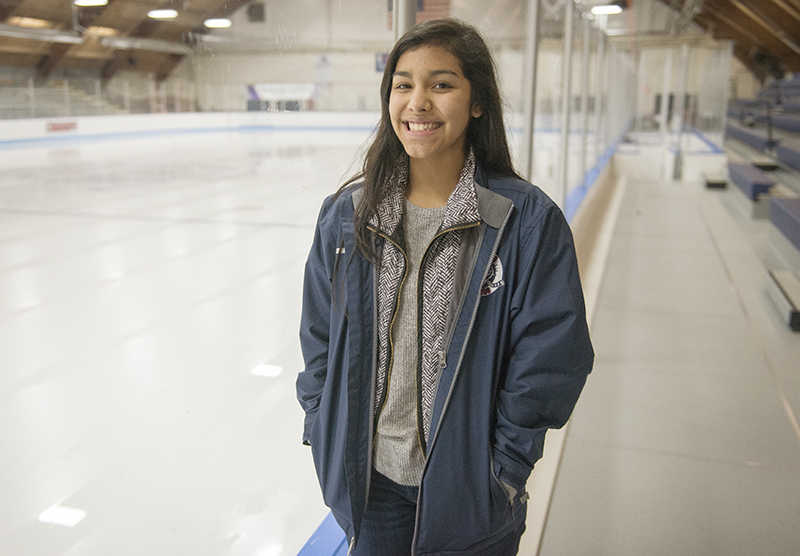 For eight years, Angelina Minear was a figure skater. She enjoyed it, and always looked forward to show week each year, but something was missing.

The summer before Minear’s freshman year at Albert Lea High School, one of her friends suggested she give hockey a try. Minear went to a summer hockey camp and loved it, so she figured she would try her luck with high school team tryouts, and that was it. She parted ways with the figure skating club and focused in on ice hockey.

Figure skating is more of an individual sport, according to Minear, whereas hockey “has more of a camaraderie with it.”

Initially trying out for a different position, Minear moved to goalie when the team needed a second to fill out its roster. Minear, now a sophomore who will be 16 next month, said she adapted to the change quickly.

“I love it, it’s so fun,” she said. “You’d think getting slammed with pucks wouldn’t be, but it is.”

She said the position of goalie is mentally challenging, and that goalies have to keep from being too hard on themselves with missed saves. It’s a team effort.

While Minear hasn’t started as a goalie yet for the Tigers, she has come on a number of times to relieve fellow Albert Lea goalie Maddie Schneider.

Also an Albert Lea volleyball player, Minear said she hopes to continue playing one of those sports — hopefully hockey — for the Air Force academy, which she plans to apply to out of high school.

“There’s an adrenaline rush there,” she said. “Just to be the best that I can be.”

Minear said she still loves figure skating, and that it’ll always be a part of her, but she’s glad she made the switch to hockey. While she learned how to skate as a figure skater, the blade edges, boot structure and the skates themselves are very different between figure skating and hockey.

“I love figure skating, don’t get me wrong, but I love hockey,” she said. “When you come off the ice in hockey and you’re drenched with sweat, you know you did something. That’s a good feeling.

“You just have fun on the ice when you play.”

Interesting fact: in addition to playing hockey and volleyball for Albert Lea, she also plays the cello with the school orchestra and sings in the school choir