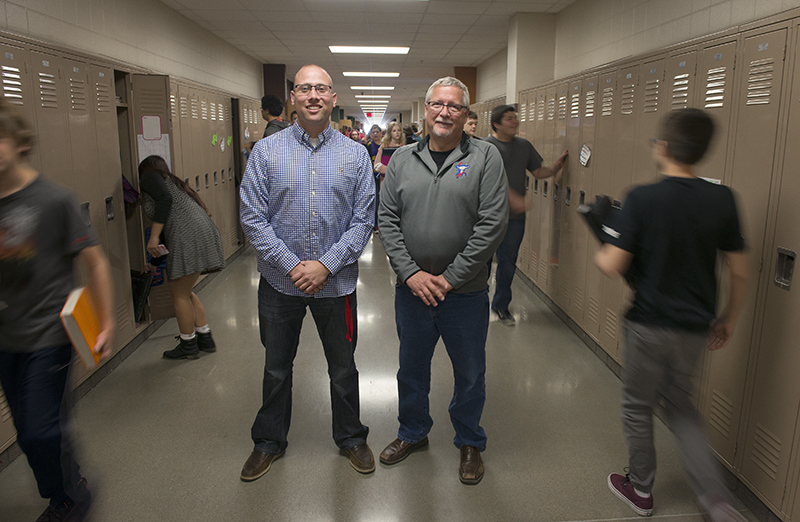 Editor’s note: This is the second in a four-part series, “Breaking Down Bullying,” published Mondays over four weeks.

“What we do see are students who are more unkind to each other,” Jerry Reshetar said.

In the Minnesota Department of Education’s State Model Student Bullying Prohibition policy, there is a distinction.

The state’s model policy defines bullying as “objectively offensive intimidating, threatening, abusive or harmful conduct directed by a student toward one or more students: when either there is a real or perceived imbalance of power between those involved and the conduct reoccurs or forms a pattern; or the conduct materially and substantially interferes with the student’s education opportunities, performance or ability to participate in school functions, activities or programs.”

According to Albert Lea Area Schools Superintendent Mike Funk and director of secondary programs Kathy Niebuhr, an “imbalance of power” could look like age, social status or something else. But Funk pointed out what Reshetar and the state policy both lay out, too: Bullying is a repetitive behavior.

The state steps in

The Department of Education’s model policy is a result of a 2014 state Legislature decision called the Safe and Supportive Schools Act. The act has had a direct impact on how schools create policy and educate students on bullying.

“I would say this law has made a big difference,” said Emily Bisek, Minnesota Department of Education assistant director of communications. She said the law has helped students but has also helped adults further understand their role in addressing bullying incidents.

Craig Wethington is the director of the Minnesota Department of Education’s School Safety Technical Assistance Center, which works with school districts and the Minnesota Department of Education to provide resources for schools and assist with bullying prevention. He said the state law established the School Safety Technical Assistance Council, and one of the first activities it undertook was to assist the commissioner in drafting the state’s model policy.

Therefore, all of the schools in Minnesota have a baseline policy with state-set standards they must meet when addressing issues of bullying at school.

“I would say that that law is directing schools to have a policy … so it’s very specific,” Wethington said. “It outlines very specific things they need to have in place.”

However, schools are required by the Safe and Supportive Schools Act to adopt and consistently review their own written policy that is consistent with what is set out in the state model policy.

In the Albert Lea school district, for instance, Funk said the district’s bullying policy was recommended by attorneys. At United South Central schools, school social worker Jennifer Crawford said the policy is part of their Olweus bullying prevention program, which has been in place for over five years.

The Minnesota School Board Association recommended a policy that NRHEG secondary school principal David Bunn said influenced the policy now instituted in his district. The NRHEG district has had a policy of sorts since 2003, but Bunn said it was updated after the 2014 legislation.

One emphasis of the state’s model policy lies on the investigation of reports of bullying. The model policy states the school must maintain investigative records that are regulated by the person designated to receive reports at the school level.

“I think that component has certainly added a piece for us,” Bunn said.

By maintaining records of bullying incidents reported, he said NRHEG is able to check back on previous reports, including ones that were not substantiated, to see if a pattern of behavior is appearing.

Funk said the state policy has provided for Albert Lea schools “a robust reporting process that was not there before.”

However, Niebuhr said the system of reporting is not utilized frequently.

“We have very few incidents that actually rise to the full level of bullying reporting,” she said.

Albert Lea, NRHEG and United South Central all provide reporting forms for students to fill out, which are to be made available at the school principal’s office. At NRHEG, Bunn said most of the bullying reports are made verbally.

Crawford said no matter what, any report that comes to the attention of a school administrator will be put on a form.

“That’s just a place to start,” she said.

School resource officer Ryan Murphey said there are approximately 700 students in the school. Of the reports the administration receives, bullying makes up 2 percent.

Funk said the investigation procedure set forth by the Albert Lea district bullying prevention policy is vague because issues are addressed on a case-by-case basis; what one incident requires is not what another may need.

However, the state model policy dictates the schools must launch an investigation into a bullying report within three days. The Albert Lea district policy has decreased that to one.

Although United South Central’s policy still allows the district three days to launch an investigation, Kuechenmeister said 95 percent of the time the school will investigate the report on the same day.

“It’d be rare that we would wait that long,” Fleming said.

He said same-day investigations do not allow facts to change overnight.

At United South Central, the investigation process follows the same general outline: When a report is received, Murphey said the school investigates by watching cameras and working to substantiate claims. They conduct interviews separately and look through previous reports for further information.

According to Funk, a bullying policy can only go so far.

“The Minnesota state Legislature cannot legislate away bullying,” he said.

Funk said what the state had before was weak, but a policy reaction is not what will be effective in reducing bullying.

To Niebuhr, the conversation about bullying and the way it is addressed transcends school walls.

“Even if you read the first part of the policy … we can’t see everything, and that’s, you know, that’s pretty clear,” Niebuhr said.

This balance between inside and outside efforts particularly weighs into the way the Albert Lea school district deals with cyberbullying. Both the United South Central and Albert Lea policies state bullying falls under the school’s purview if it is disruptive toward the student’s experience at school. For the Albert Lea district, bullying includes behavior on or off school premises if it substantially disrupts a student’s learning. In the United South Central district, bullying includes behavior that provides an unreasonable interference with a student’s performance or creates a negative learning environment.

However, the schools implement discipline for cyberbullying in different ways.

“There’s got to be a nexus to the school,” Funk said.

For him, this means cyberbullying must either happen on school equipment or explicitly state a connection to the school.

At United South Central, Crawford said the nexus is that it disrupts the student’s learning or education.

“If it walks through our door in some way or another, if that conflict creates a disruption once they’re here, it becomes our issue,” Fleming said. “Even if it occurs on the weekend or the night before, if it comes through the door the next morning, it’s our issue.”

Murphey said the school takes more of a guardian role in these instances.

When incidents occur off school property, Niebuhr said parents can take those issues to other community authorities. The approach she said the school takes in incidents like cyberbullying indirectly connected to school and other bullying outside school jurisdiction is about education: making students understand their behavior is hurtful.

As of now, Wethington said there are no plans to amend the 2014 Minnesota Department of Education Model Student Bullying Prohibition policy.

“We feel the model policy is written toward the existing law,” he said.

Fleming said he also didn’t see any gaps in the United South Central bullying prevention policy. Murphey said that when they do consider what the policy may need, the administrators consider feedback that comes through students and parents about how they think the school is handling bullying.

But again, Niebuhr said the scope is wider. Regular education for staff and students is another requirement set forth by the Safe and Supportive Schools Act.

The sense of school community is also what United South Central bases its Olewus program on.

“I think there seems to be layers of accountability,” Murphey said.

He mentions staff, parents and students as those layers.

“We don’t expect that child to fight on their own,” she said.