Memorial services for Virgil C. Worke, formerly of Clarks Grove, will be at 11 a.m. Friday at First Lutheran Church in Ellendale. The Rev. Richard L. Sliper will officiate. Interment will be in First Lutheran Cemetery in Ellendale. Military honors will be accorded by the Ellendale veterans organization. Friends may visit one hour before the service at the church. 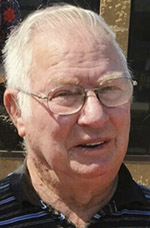 He graduated from Ellendale High School and then served his country in the U.S. Army during the Korean War.

He was united to Eloris Anderson on Jan. 30, 1956, in Ellendale and they made their home in Clarks Grove.

Virgil worked at the Albert Lea Foundry for many years and then Enderes Tool before retiring. After retirement he kept busy working for the city of Clarks Grove, which he enjoyed. He also found passion helping his brother-in-law on the farm.

Virgil enjoyed snowmobiling, bowling, dancing the polka and curling in earlier years. He loved playing cards, being around family and enjoying good food.

He was a member of First Lutheran Church of Ellendale.

He was preceded in death by his parents; wife, Eloris; and siblings Donald, Dale, LaVerne, Paul, Jack, Marjorie and Dorothy.

Virgil was kind-hearted, caring and a jokester who loved his grandchildren dearly and would do anything for his family.